Common sense prevailed at the weekend.

In what was a fairly predictable U-turn, radio communication has been officially re-allowed between drivers and the pit-lane during the Formula 1 Grand Prix.

For those not up to speed; the FIA (Federation Internationale de L’Automobile – the sport’s governing body) decided at the beginning of this season that it was better to prevent the teams being able to give drivers advice, guidance and support via radio.

Apparently they (the drivers) were gaining an ‘unfair advantage’ by being given this information. I’m not sure how you can call it an ‘advantage’ when every driver in every team has access, but this is Formula 1; we’ve come to expect these sort of things, with various rule changes constantly coming into force.

So, in the 2016 season the driver had to drive the car ‘alone and unaided’.  That meant that during the race, the drivers had to work out for themselves how to solve problems whenever a glitch presented itself .

Questions heard over the radio such as “Can’t you help me with this?” were followed with “Sorry, no, we can’t,” from the team in the pit lane.

Bonkers – at 200 miles per hour, the driver is expected to ‘fiddle’ with dials, buttons and switches (one of which might be the issue, or it might not) on a steering wheel that make an Xbox controller look decidedly simple. 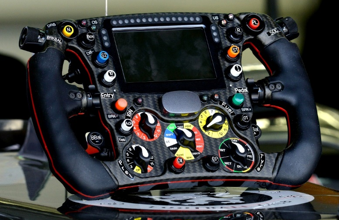 I mean. Have you seen what a modern F1 steering wheel looks like?

Before this rule, the drivers were being told who was where on the track, where their nearest competitor was, their lap-times, issues with the car, what changes/adjustments to make (the steering wheel can perform a myriad of adjustments on the cars – dozens of engine settings, brake balance etc).

True, this information is incredibly useful. However, and this is the crucial bit, it’s up to the driver to use this information in whichever way they think will get them to the chequered flag first. There’s no ‘unfair advantage’ – it’s about working as a team in the best possible way, and supporting each other in the midst of a race.

A lot of people don’t think Formula 1 is a team sport – it absolutely is, and the success of the team depends on the instincts and expertise of one another.

To put this into context – if the race is when the drivers really go to work, then the equivalent for me and you would be to be told you can’t report a problem with your IT during office hours; you have to sort it out yourself (yeah, right) or wait until after work for some help. Bonkers!

The advice and guidance helps, providing you take it on board and apply in the right way.

So as of last Sunday’s German Grand Prix, the rules were relaxed and radio communication allowed.

Not only did this make for a more interesting spectacle (it’s always fun to hear the occasional driver rant when something happens that they don’t like), but it also gives an insight into the thoughts of the teams and the drivers too.

Besides, this is vital support for the drivers. Modern F1 cars are not simple. The power units (they don’t call them engines anymore) are unbelievably complex. The rule to ban radio communication wasn’t levelling the playing field for everyone. All this rule did was remove a key aspect of the competition – the team.

The cars are monitored remotely, reports are generated, which then goes back to a dedicated team of engineers, who then relay to the driver any issues, adjustments to make via the steering wheel (which button to press), all so he can motor on and hopefully finish the race, if not ultimately win it.

Which brings me to my main point. I realised the importance of having a great support team available when you need them. That is exactly what we have got here at TSG, a team of extremely skilled support engineers, ready at a moment’s notice to leap into action and provide IT Support.

We’re the pit crew, providing the support to our customers – the drivers.

With TSG SystemCare we can remotely monitor systems, diagnose and fix faults even before the customer knew they had a problem. Our SystemCare ninjas are on hand to provide support when you need it.

Modern IT systems are expected to ‘just work’ and for all us users, we have gotten used to having 24/7 access.

However, when it goes wrong, what you get from TSG is a dedicated team of engineers who can sort out the issue and get you motoring again.

When it happens, we’ll be there. You don’t even need to come into the pits, a phone call will do. Radio silence is not an option.

Just for fun, here’s a clip from the German Grand Prix at the weekend – the fastest pit stop award went to the Williams team who did a complete tyre change for Felipe Massa’s car in 2 seconds flat. Impressive stuff!