Home / Insights / Every Move You Make, Apple Watch-ing You

Every Move You Make, Apple Watch-ing You

Go big or go home – that was the expectation facing Tim Cook before Apple’s product demonstration event this week.

For a company that built its popularity by reinventing markets (the iPod changed the music industry, the iPhone paved the way for the smart phone), Apple have been accused of having to playing catch up of late – whilst their competitors gained more and more traction.

Google’s Android platform only grows in its user base and, dare we say it, Microsoft have been undoing the ‘boring’ reputation they’ve been so carefully building for the last 20 years by announcing curiosities such as HoloLens, their virtual reality product.

This was a chance for Apple to make their case. The general expectation for the event was that we would see some more details about the Apple Watch since its design debut in September. A big deal particularly because this was Tim Cook’s first brand new product launch since taking over from Steve Jobs.

Did they go big? Well, sort of. There was more to this event than just the Apple Watch.  But overwhelmingly, it was a case of ‘Go Apple or Go Home’.

Every announcement was layered with a thick dollop of ecosystem lockdown. There was little attempt to try and seduce non ‘Applers’ – this was definitely one for those already signed and sealed into the Apple fan club.

Four key announcements were made at the event:

1) A brand new MacBook, 24% thinner than the previous version and now available in gold. Looks stunning but has one puzzling feature – it only has one USB-C which you can use to charge the device, send video out, and transport data. But you can do none of these at the same time.

Some say that this is Apple’s vision of a future for devices that are “connected to everything, tethered to nothing.” Which might be physically true, but you could still be tethered to Apple by using iTunes for your music, iCloud for your files storage, and AirDrop for sharing them. Others argue that it’s an unreasonable expectation which forces you to shell out another £60 for the multiport adaptor.

Either way, its bucking industry standards, not that Apple have had a problem doing that in the past. Like in 1998 when they didn’t ship their iMac G3s with floppy disc drives.

2) ResearchKit – “Turns your iPhone and Health Kit into powerful diagnostic tools”. Apple are working with organisations associated with Diabetes, Parkinson’s Disease, Breast Cancer, Asthma and Cardiovascular Disease to enable apps to be developed which can help clinical trials and, in the case of Breast Cancer, allow survivors and anyone going through treatment to share stories. For example, you will be able to use your iPhone to measure hand tremours.

3) Apple TV (the device which allows you to stream videos and content from your iOS devices) got a price cut – it’s now £59 as opposed to £79. Cheaper than most of its biggest rivals (which is unusual for Apple), perhaps it’s a move to shift more of these in bulk, and make sure more people are using Apple to stream their TV content. A partnership with HBO was also mooted. 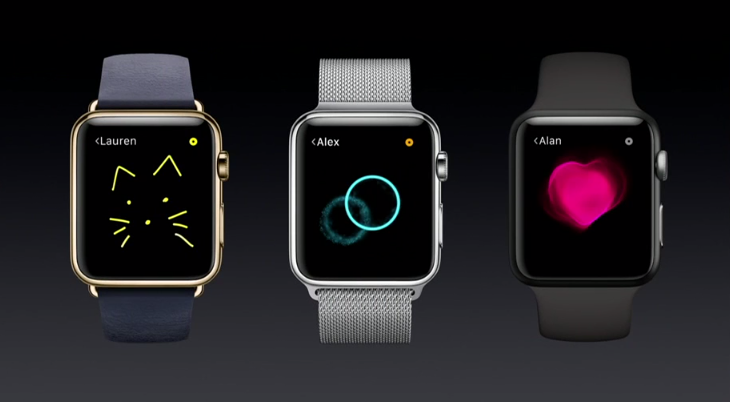 And this is the thing – when we first saw the Apple Watch in September there was as much of a focus on the health and fitness aspects of the device as the fashion – a massive range of straps and clock faces are going to be available. You would be able to get real time stats on your work out, it would alert you to stand up more and sit down less, and it would suggest personal daily activity goals.

Although there was plenty on the health aspect at this most recent event, Apple are definitely hedging their bets on the Apple Watch being the ‘must have’ fashion accessory.

Perhaps this is because the reports on sports focussed wearable technology indicate that the vast majority of usage drops off after around 2 months. So instead of trying to turn this around, they’ve gone for the design appeal, calling it ‘the most personal product we’ve ever made, because it’s the first one designed to be worn.’

Aesthetically, it’s a desirable device. Its appeal will no doubt be to those who don’t particularly need it, and couldn’t always make an argument for a smart watch when they can get everything and more from their smartphone and tablet. But they’ll want it anyway.

What can the Apple Watch do compared to other smart watches out there? Business Insider has put together this very handy comparison chart. One feature that will probably tip most people over the edge is the ability to receive calls on it – long a sci fi fantasy, now a consumer reality. But as you can see, other smart watches already offer this without making you buy a certain type of phone as well. 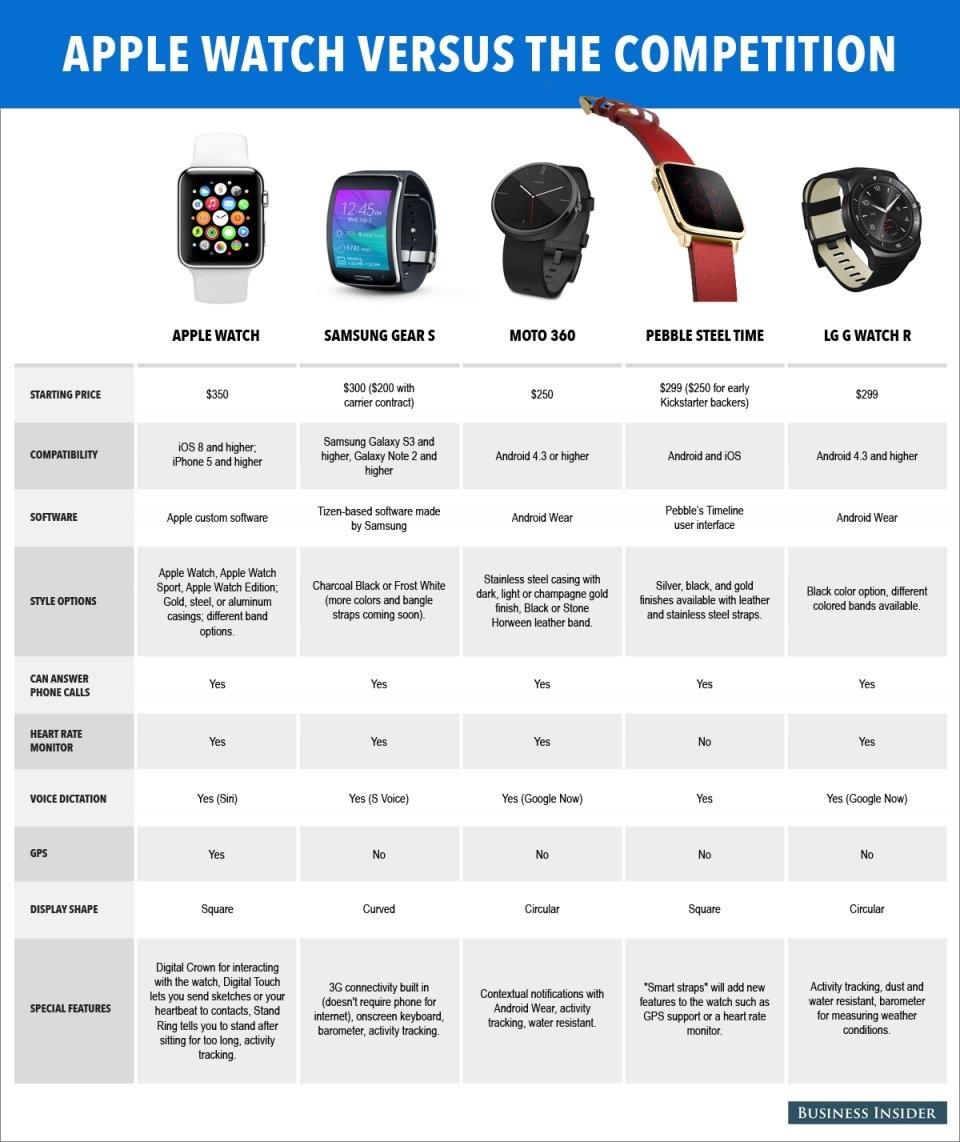 I did a poll with my fellow technology bloggers, asking them whether they would consider buying an Apple Watch when it comes out on sale. Their choices were:

A) I’ll be pre-ordering it

C) Might get one at some stage – probably next generation though

D) Not a cat in hell’s chance

Well, they didn’t hold back.

One person said ‘B’

The overwhelming majority went for ‘D’ – 13 in total. Those who went for D weren’t content in just picking a category either – they felt they couldn’t hold back in explaining their reasoning:

“Why buy a second rate product at that price? Get a LG watch R or a Pebble time, something that works and isn’t just designed for apple sheeple.”

“Not a cat’s chance in hell – real tecchies use Android.”

“Until I can buy a car and call it KITT I’ll just save up for a Rolex phone instead.”

I’d like to point out that the TSG bloggers aren’t exactly a fair representation of the buying collective. We’re a fickle bunch too.

However, their responses did give confirm my belief that Apple know exactly who their target audience is – those who don’t mind being locked into the Apple ecosystem (an Apple Watch only works with an iPhone 5 and above), purely because their whole technology environment revolves around that brand.

Every move Apple make, this audience will want the latest version, no matter what the difference is to the preceding versions.  And they wouldn’t have it any other way.

Analysts are predicting that Apple will sell almost 20 million watches this year. This is largely based on the historical pattern that when Apple enter a new market, adoption hits the roof. Plus Apple’s popularity in China is huge – their retail stores are popping up at an alarming rate. The key selling point throughout will be Apple’s ecosystem.

So, have Apple brought some magic to the smart watch industry? Is this the start of another Apple revolution? I honestly can’t call it. Let me know what you think, and feel free to take part in our poll too. Let me know if you’re in the A, B, C or D camp in the comments section below.