Home / Insights / Happy Back to the Future Day!

Happy Back to the Future Day!

It’s been quite a week for movie fans.

First of all tickets went on sale for Star Wars: The Force Awakens (I’ll be attending a midnight screening with my cinema club, affectionately titled ‘Nerdfest’. And yes, we’ll be going in fancy dress.)

A new trailer for the film ‘broke the internet’ and my friends and I have not stopped speculating about what all the various hints mean. Who’s the man in the mask? Is that Leia and Han’s daughter? Where’s Lando Calrissian?

In an incredibly clever piece of work, someone recreated the Jurassic World trailer with a £50 budget.

And today of course is ‘Back to the Future Day’. The day Marty, Doc, and someone who looked a little bit different to the Jennifer from the first film, arrived in Hill Valley to what movie producers in 1989 thought 2015 would look like.

For anyone who hasn’t seen the film in a little while, there’s no better reminder than the original trailer:

We could all of course have been celebrating ‘Spaceman from Pluto Day’ if the head of Universal Pictures at the time had had his way (apparently he didn’t think audiences would go and see a movie if it had the word ‘future’ in the tile). Luckily Steven Spielberg handled this by pretending they all thought it was a very funny joke.

Also, the time machine wasn’t going to be a DeLorean, but a washing machine. Until someone pointed out kids all over the world might get trapped in them after becoming inspired by the film’s events.

I knew the internet wouldn’t let me down in terms of the quality of tributes, memes, articles and videos to Back to the Future Day.

So here’s my pick of the very best:

1) Want to know how good those predictions were? The BBC has compiled a comprehensive list of all the props and set pieces in Back to the Future Part 2 and compared them to the real October 21st 2015.

2) A really touching video this one – Doc Brown records a message for his fans:

3) Eagle eyed viewers of Back to the Future Part 2 will have noticed that the town’s cinema was advertising ‘Jaws 19’ – a tongue in cheek reference to how many sequels it had already spawned by 1989. Someone has actually done a mock trailer for Jaws 19, and it is brilliant: 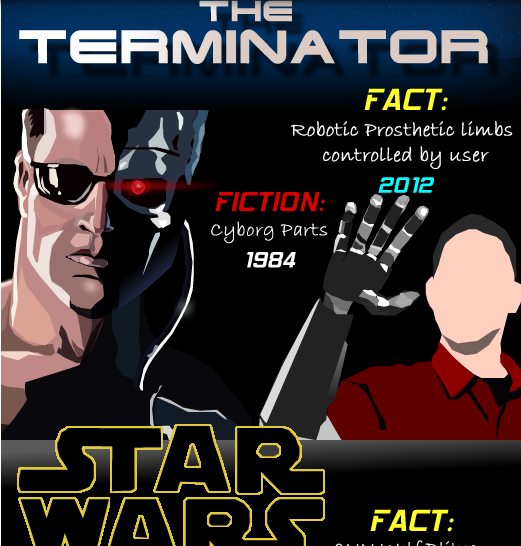 Last but not least check out this infographic we created which shows you the which takes a look at the amazing technology that has caught-up (or is not far behind) the movies – the Sci-fi tech that actually came true.

As well as Back to the Future, references include the Terminator, Ghostbusters and Blade Runner. Indulge your 80s movie nostaligia for a few minutes and have a browse

Have I missed a corker? Send me a link in the comments section!