Here's why VAR in football is going to improve the game

It’s been a ground-breaking month for technology in football, as the first match using video assisted refereeing (VAR) in England took place on 2nd January, followed shortly by the first goal awarded using VAR. EDIT: The fifth match using this technology was played on Saturday at Liverpool’s Anfield, and the debate over whether or not it should be implemented is in full swing.

The application of VAR in football comes not long after goal line technology was rolled out in the Premier League in 2013, and successfully implemented at the 2014 World Cup.

There’s no doubt that goal line technology has improved the game; the first decision in January 2014 was to award Manchester City a goal that arguably helped them on their way to their second Premier League title. There’s few detractors of goal line technology these days, but VAR is a different story.

Leicester City’s Iheanacho made his way into football’s history books as the first player to score a goal awarded by VAR, which correctly showed that the striker was onside. The technology adds an additional level of authority for tricky or wrongly given decisions; linesman Lee Betts was overruled by the technology.

EDIT: Saturday’s game between Liverpool and West Brom highlighted both the benefits and pitfalls of the technology. 2 decisions were awarded in Liverpool’s favour based on VAR: West Brom’s third goal was disallowed after a video replay showed that Gareth Barry impeded Liverpool’s goalkeeper Simon Mignolet whilst in an offside position. Liverpool were then awarded a penalty after a replay showed that Mohamed Salah was pulled back by Jake Livermore; history was made again as this was England’s first penalty awarded via VAR. Joel Matip’s own goal was finally confirmed through VAR.

Many of the arguments against VAR centre around the disruption to the game. Some believe it’ll make the game too stop-start, or that decisions will take too long. In fact, the Iheanacho decision took less than 70 seconds from the ball hitting the back of the net to confirmation that it would stand. However, Liverpool’s loss to West Brom demonstrated that, if VAR isn’t implemented and utilised effectively and efficiently, it can add time to the game and leave fans inside the stadium confused.

Others say it will overcomplicate football, that we should leave referees to do their jobs. Notts County manager (and a personal hero of mine – as you can see) Kevin Nolan has suggested that VAR should be implemented, but managers should be given ‘tokens’ to use in order to disrupt the game as little as possible. 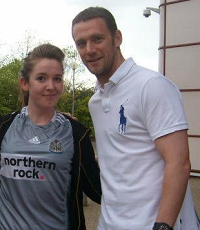 If a manager calls for VAR to be used and is correct, they can keep their token. If the VAR proves them wrong, they don’t get to use it again.

As an avid football fan (Newcastle United, for my sins) and a lover of technology, I think VAR can only improve the game.

There’s too much room for human error in refereeing, especially in the fast-paced environment of Europe’s top leagues. Every week I see incorrect refereeing decisions; a standout for me was our 1-0 loss to Nottingham Forest in December 2016, where two Newcastle United players were wrongly sent off, and two penalties were wrongly given. We won the Championship by a point that season, largely because Brighton dropped points on the final day of the season. Those two decisions – that would have been overturned by VAR – could have cost us a league title.

The evolution of technology means that in football and business, we now no longer need to worry about human error. From machines taking over repetitive tasks from factory workers to our current ability to automate entire manual processes, technology allows us to focus on value that only we can add.

VAR won’t replace referees and match officials, but they’ll plug the gaps in the game; the Iheanacho incident would have been incredibly difficult to call in real-time as it was so tight. Referees might be in a difficult position when looking at a penalty decision. How many times have you seen an incident that looks like a penalty from one angle, but a dive from a different camera angle?

Referees are likely going to be called on to make a final decision whilst using VAR; the technology isn’t going to make all calls alone. It’s about complementing people with technology. Our Business Intelligence Specialist Stu Wannop has been in BI for years, and is an avid advocate of Qlik Sense.

This next-gen BI tool takes a lot of manual work out of business intelligence, but rather than it replacing our business intelligence specialists, it’s allowing them to add real value that only they can add. Instead of spending hours manually sorting and visualising data, they can click a button and focus on analysing it and using it to help TSG and our customers make better business decisions. It’s one of the best BI products on the market because of this.

Similarly, tools like Flow and Nintex, which automate small tasks or entire processes, aren’t replacing people, they’re giving people time back and making them more productive. By streamlining order or sales processes, or how support queries are routed for example, you can save your staff hundreds of hours of their time, allowing them to increase productivity.

We’re seeing this theme come through in a lot of our partner products; Office 365 is essentially a toolkit that supports users and streamlines communications, admin tasks and more. Sage 200c comes with a brand-new Bank Feeds feature, which takes away the manual task of entering bank transactions into your ERP system.
As VAR in football demonstrates, technology will never replace people in some areas; it’s about supporting people, getting the most out of them, and eliminating human error.