It has been a long time coming but the new line up of new Microsoft toys has really blown me away with what is happening in the devices space, and from a software company!

It feels like an episode of ‘Tomorrow’s World’ just became a reality and will hopefully be in my hands before Christmas morning.

If you didn’t log in yesterday and watch the Microsoft devices update then don’t worry, I’ll save you 100 minutes and you can now be super productive by reading the highlights in 5 minutes. Productivity in Action.

Today reminds me of a game my 3 girls play whilst watching the Disney channel and shouting “I want that” at the adverts with an innocence that believes if I say it first and loudest I might just get it! Well today I was the one in the office saying “I want that”.

Starting with the ‘home experience’ and gaming.  Microsoft is bringing Windows 10 to the Xbox One as well as some new games and bundles.

Gaming itself isn’t really the driver for me; it’s more about having a consistent experience across my platform of choice. I want my ‘Famtertainment’ (I don’t think that’s a keeper folks) – by that I mean I want the whole entertainment experience to be on one box in the house, and be able to access all our content, securely, and with a slick interface my grandma can use.

I will be banishing the DVD player, Sky box, doubtful, and Xbox 360 in favour of a new Xbox in the hope I can watch and share both work and family life without picking up 3 remotes and a network cable. This is the utopia, but it looks like it is closer than ever today and that is without even starting on the gaming innovation.

Do I want to “Live Healthier and Achieve More” Err yes of course I do, so what can you do for me?

Well I have been a Band fan for a while now and it has changed my outlook. I might not be ‘Juicing’ or ‘Eating Clean’ but I do know how bad I have been and when to push or praise, which is a feat in itself. So what can the new Band 2 do for me?

I can now “optimise and systematically achieve much more than my goals – I can achieve my personal best”. Really you can’t make this stuff up. So what have Microsoft actually done besides make it round, which is one of my feature requests!

Okay that one is a grower and not a pre-order.

“Let’s Re-Invent the Category and be more Productive with Surface”, not yet… let’s look at the Phone first. 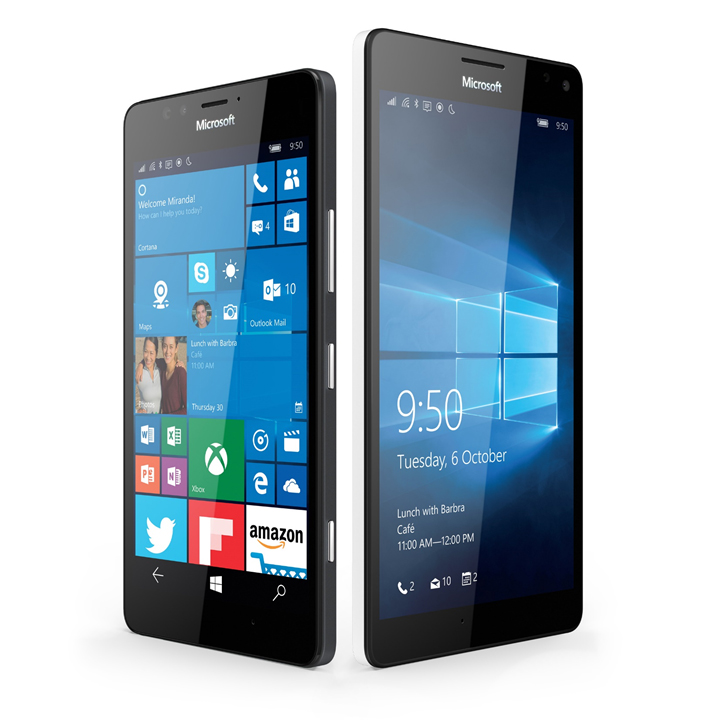 So it’s just a new Phone yes? Apple just released a new phone didn’t they and it detects how heavy your finger is and reacts to your finger compression and it curves a bit I am sure and flashes in 4K on the screen.

Does the Lumia do that? Do I care? Will it change the way I work? Probably not. The thing is – I don’t care about the tech stats or how it has ‘tablet class liquid cooling’ – just make sure it works and is intuitive.

So what does it do that makes me sit up and think about pre-ordering? Hello.

Yep – Windows Hello with Cortana integration and ‘Location aware’ technology which doesn’t use any battery life. Okay that’s sort of useful. (For those of you not sure Windows Hello is a new way to logon to your device without having to enter passwords. Supposedly much more secure).

The Continuum addition means that I can have the same experience on my PC device as on my Phone. And I can still use my Phone as Phone when I’m using it as a PC. It sounds mad, but actually, man in the funny hat who tells me I can now be productive ‘like a boss’, you have just changed the way I look at my Phone and work with it.

That’s is very special. But more so with the new Display Dock I don’t actually need a PC as my phone connects to my screen. Okay where do I pre-order for the entire sales team and reduce my IT hardware costs by more than 50%. That’s a winner. And what an upgrade.

Pricing is good too, although now I think about it, I could buy two ‘Band 2’s for the cost of a Phone and a Laptop replacement!

In fact, during our blogger ‘Yammer’ chat during the live event Steven Osprey commented, “It’s the Continuum and displayport which excites me for the market. That and the continued success of Surface make Microsoft the only choice for business. If you were starting a business tomorrow with guys in the field, you just buy a Lumia each with Win 10 and a displayport for the less intense users, and a Surface pro 4 for the demo guys etc.”

Goodbye iPhone I think. Once they have sorted how I move my music over!

What was I expecting with the Surface Pro 4 after the massive success of the Pro 3? Honestly I wasn’t sure. There is such an array of great new devices coming to market that there is a smorgasbord of choice for the buyer this year. I’m excited to see what HP will do…I did just type that yes.

But what does the Surface Pro 4 bring that will stop me buying a cheaper Surface Pro 3 device that will do the job of my current HP but be a touch cooler? Apparently 98% of Surface 3 users would recommend it to their friends. Great stat, but what about 4?

So it doesn’t make me whoop and clap like it did everyone else in the room, but it is a step forward and it can slide down the gap between my bedside table and bed to retrieve the pen when it inevitably drops down the crack – useful!

By the way when did we stop wanting to put a DVD in our laptop?

The Surface Pro 4 is so thin that I’d be worried about losing it in between two sheets of rice paper soon…or those stack of useless DVD cases in the corner!

Someone just Whooped at a pen feature called a tail eraser………

OneNote is still outstanding and the additional pen features only make this better. You can see Edge Browser technology integrating into the thinking around the OneNote usage. This is where it crosses over into making me more productive in the new world of work. Touch and Pen enablement Hand in Hand. Apologies that was a bit too much.

So to sum up “The Power of Surface 4” there might not be enough differences to make Surface Pro 3 users put it straight on their Christmas lists – the 30% faster processing power is probably the main attraction. But since I don’t have a 3, and because it’s starting at $899, I’m definitely tempted. That’s probably £800 once you add a new keyboard in and charger. But still – great value.

Hang on a minute…

I had to expand the screen at this point!

All bets are off with the Surface Book. Microsoft’s first ever laptop which they say is the thinnest, most powerful PC ever created. I will forgive Bad Santa for anything to get my hands on one of these. It has the best lapability (sorry) in class.

It is outstanding though. I won’t bore you with stats but business users rejoice. Redmond you have landed and are now making me giddy for my new machine.

Sorry Panos I won’t be building the next Shard with it, but I am going to absolutely enjoy using it, and evangelising it. Great job. And $1,499 so great price again.

The best thing about the Surface Book? It becomes a clipboard which simply snaps off.

A great Finale and some vision from Satya (CEO). He is clearly the right choice to direct the business forward and keep them relevant and dominant in the market.

Clearly then the Microsoft machine has been busy building and developing a new category for businesses. Devices from Microsoft 3 years ago were a joke. But look at them now. They are outstanding business and consumer devices. And I want them all.

The question for the market is what do the rest of the OEM providers (HP, Dell, Lenovo, Apple) do next to push past this new category without creating more focus on their own Software business?

They know they aren’t going to write or compete with Windows, so this just pushes them to innovate and bring more affordability and choice to devices with the Windows platform.

It’s a great time to be in devices and as a recently signed Devices reseller watch this space to see how we will bring this experience to your business.

I have been a good boy this year please bring me:

PS. Santa I know I probably don’t deserve the Surface Book as well but checking my schedule I am in the US in November so please speak to the elves and get them to make enough of the base level Surface books so I am not forced to buy the highest spec that you will inevitably flood the market with.

PPS. I didn’t mention HoloLens but seriously that is for Easter clearly.

PPPS. I definitely don’t deserve a Surface Hub yet