The Microsoft World Partner Conference (held in the heart of DisneyWorld this year – Orlando) is when Microsoft kick-start their new fiscal year, and make key announcements on what products and services they’re going to be focussing on.

Being so close to the launch date, we’re definitely expecting a lot of coverage about Windows 10. So I’m also hoping for some great demonstrations – particularly around the new ‘HoloLens’ product.

These are the highlights of Day 1:

Last year we had to wait until nearly the end of the conference until we heard from Microsoft’s CEO Satya Nadella. Today, we only sat through 10 minutes of Phil Sorgen (Microsoft’s Corporate Vice President for the Worldwide Partner Group) and his proclamation of maintained commitment to Microsoft’s partners, plus a few words about their cloud first, mobile first strategy (because you have to start with those when you’re on Planet Microsoft) before Nadella was introduced to the audience of 20,000.

Main highlights from Phil: The IDC is forecasting Cloud to be a $200 billion market by 2018, and Microsoft are upping their Surface reseller count from a few hundred to a few thousand across the world over the next few months. So if you haven’t got a Surface in your business yet, expect demand to soar.

Onto the main event. Bringing Nadella on so early on in the proceedings made absolute sense in my eyes. Because whilst he talked a lot about the actual technology which is available now to businesses of all sizes (and it is incredible), he anchored this by acknowledging the pace of change in the technology industry right now.

I couldn’t agree more – I’ve never seen things move so rapidly, and technology has always been a fast moving market to begin with. What I got quite excited by was when Nadella intimated that Microsoft’s customers should pause and not become swept up by new ‘stuff’, but to consider how we can use the technology to its best effect in our businesses. He called this the ‘reinvention of business processes and productivity’ – and this was our theme today. 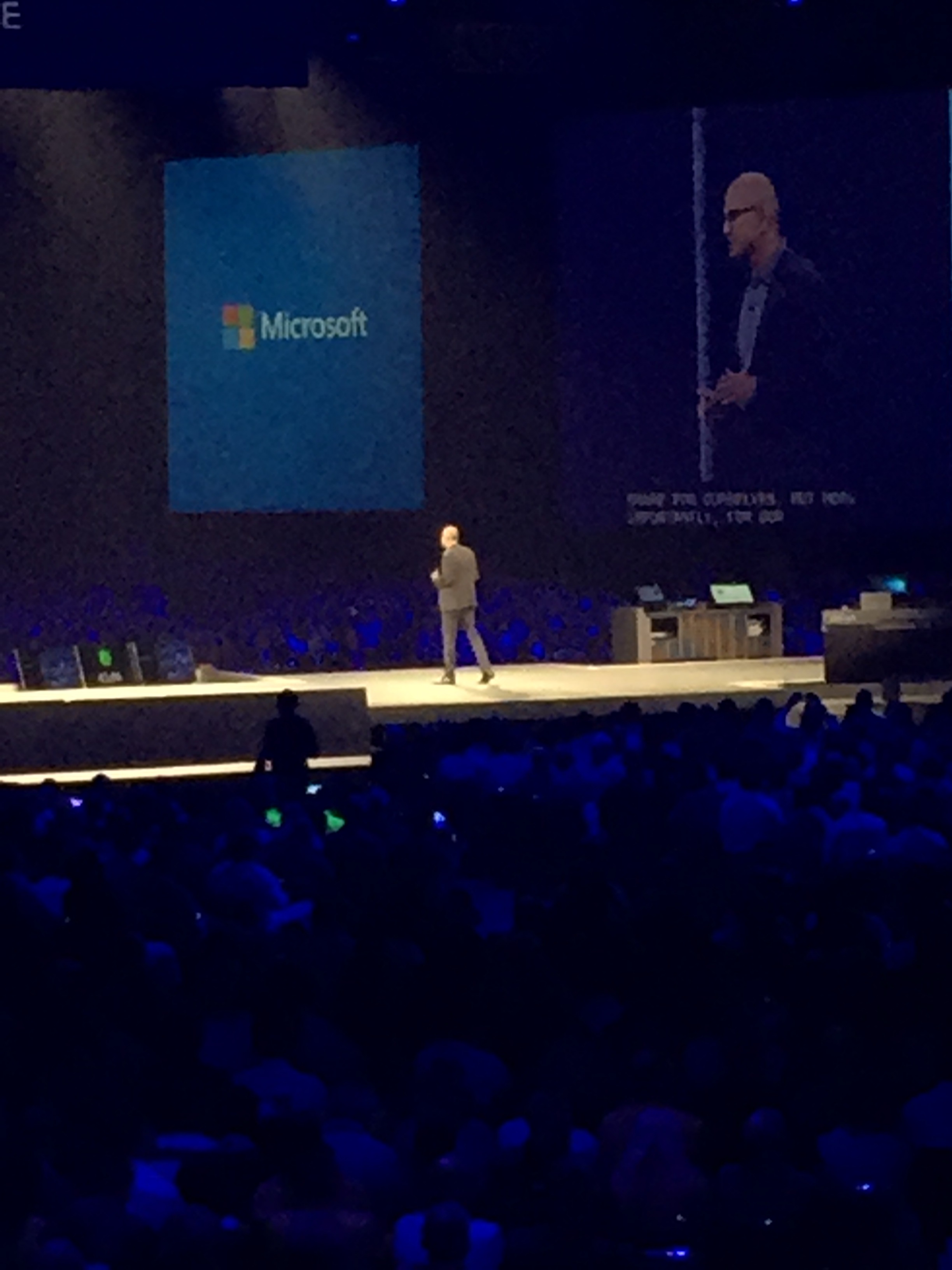 Nadella received a huge round of applause when he walked onto the stage, and whilst he didn’t revel in it like his predecessor Steve Ballmer so often did at these sort of events (a gentle hand acknowledgement was sufficient) it’s clear what a hugely popular figure Nadella has become after only one fiscal year.

Nadella described as Microsoft’s ambition as wanting ‘everyone to achieve more’. This is more than just a soundbite at Microsoft he said, taking the audience on a little journey through history and how people have always had a core sense of purpose. As we move forwards in a ‘cloud first, mobile first’ world, it is about ‘empowerment’ and ‘helping our customers achieve greatness’.

Sounds great. But what does it actually mean?

This is Nadella’s take on ‘cloud first, mobile first’:

Mobile first: this is the ‘mobility of experience’, and it is ubiquitous. We will have sensors that recognise us, computers that we wear, and computers that interact with us – through things like holograms (awesome). This ‘futuristic’ outlook is here now, and this what the term ‘mobile’ is going to mean.

Cloud first: Cloud provides the compatibility required for multiple devices and interactivity, allowing us to move seamlessly from device to device. He described using the cloud as being able to ‘excel using digital technology’. And wanted to encourage people to use tools for a dynamic, network driven workplace. Bringing ingenuity to solve problems that happen.

Not the easiest of things to digest. So how about an example?

Enter Julia White, Microsoft’s General Manager/ Office product marketing who impressed everybody when she demonstrated the Office app for the iPad just over a year ago.

She was a business manager, working for a construction equipment company. They had a large customer who was at risk, and therefore needed to call an impromptu, urgent meeting to work out how they could get the customer back on board.

Julia pulled up the customer’s recent orders on her Surface (broadcast to the live audience via a Surface Hub), pulling information from Dynamics. She then asked Cortana to ‘show my emails’ and then ‘filter emails by customer’.

She could then share these two views with others (although she could cross out any confidential information which would then not be shared with anyone else in the meeting). Essentially, she had created a mini app, with all the information she wanted, and would want others to see.

Steve Clayton, Microsoft’s ‘Storyteller’, joined Julia, accessing the information on his iPhone. As is always the case with live demos, it didn’t go particularly smoothly – although Steve managed to make a joke out of it (“I love my iPhone – third time’s always a charm”).

The two of them then communicated with fictional account manager ‘Katie’ who was based on site with the customer right then. In the context of the customer’s journey, and using all the information they had to hand, Katie was able to recommend a discount that should get the customer back on side.

This was a customer risk situation, common to most, if not all businesses. Instead of taking half a day to summon the right people and access the right information, Julia was able to reduce the fuss and the amount of time to be potentially wasted, decide who saw what information, and approve a measure that would be their best chance of keeping the customer loyal, based on their buying history.

This service is called GigJam (https://www.gigjam.com/) – captioned as ‘It’s your gig. Work the way you want’ – and Julia described it as the future of communications and productivity.

Data: the Holy Grail for the business who wants to succeed. And yet it remains incredibly difficult to mine data really effectively, and isolate the information which will help you make better decisions.

Satya Nadella, back on stage, talked about converting data into intelligent action – so what questions need to be asked of your data, and what answers do you need to not only predict outcomes, but also automate processes because of these predictions. 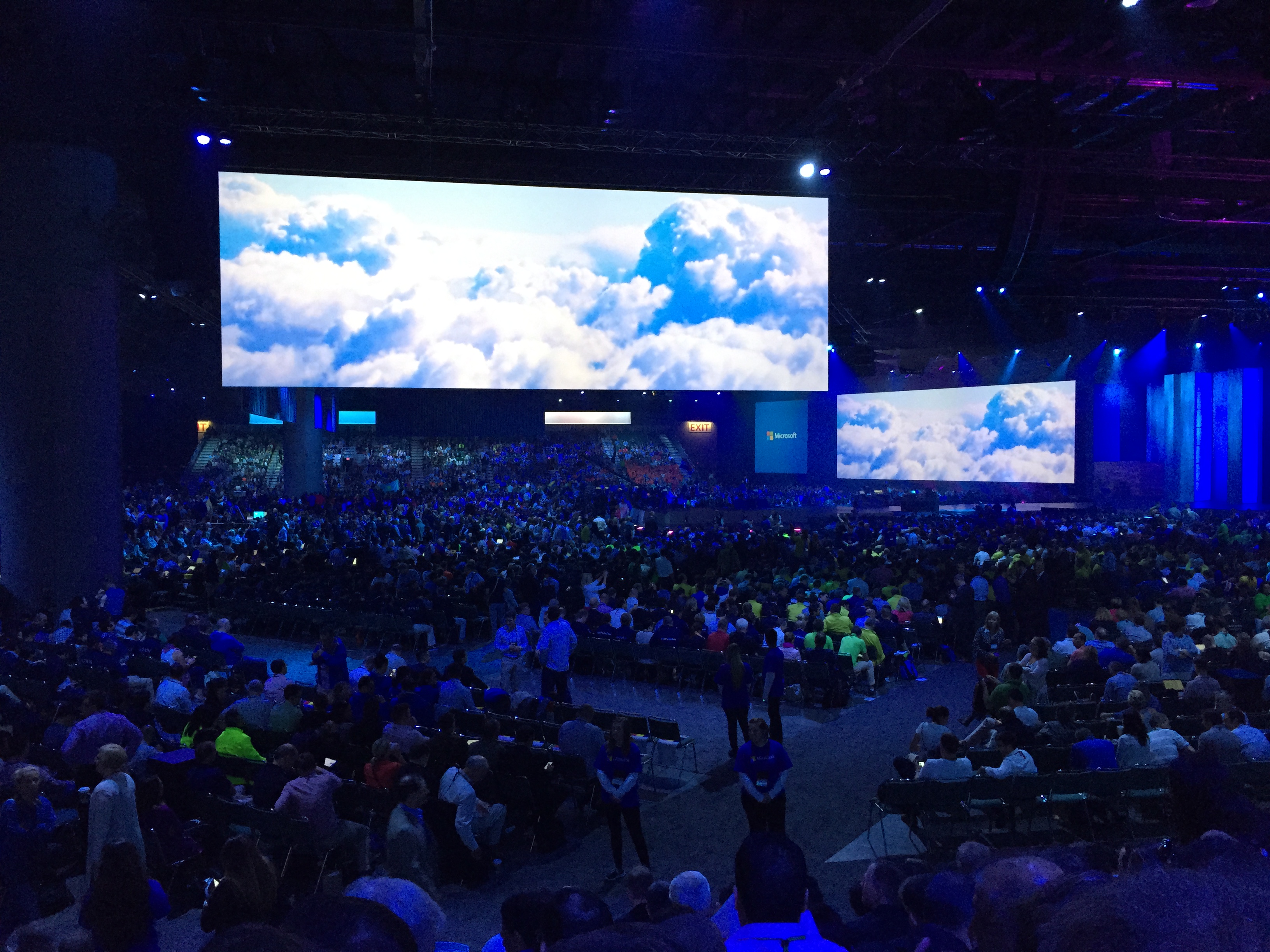 In order to help businesses achieve this level of nirvana, Microsoft are bringing Cortana into the mix to create one brand new suite: Cortana Analytics.

This allows any sized business to take advantage of sophisticated technology, and be able to track themselves through data stored in the Cloud. You can use Cortana, your digital assistant, via voice or type activation, to access and transform the data.

An example of this came from a company called North American Eagle. Their mission is to break the world’s land speed record (763 mph – held since 1997 by Britain).

They have built a sophisticated racing machine, and are using Microsoft technology to collect as much data as possible, to know they are going as fast as they can, as safely as they can. Cortana tells them where they need to be looking in order to make improvements.

When Microsoft have talked about things like Big Data and machine learning in the past, it always seemed like they were either off limits to small businesses, or not relevant. North American Eagle are in the middle of a Kickstarter campaign – Nadella said this was proof that sophisticated data analytics was now in reach of small businesses and could help them with “the pursuits of their dreams”.

Availability for the Cortana Analytics suite will be autumn, through a monthly subscription.

Microsoft’s ambition in the 80s was to put a PC on every desk. Today, Windows 10 is to be your first, your last, your everything. Microsoft want you to put all your data into Windows 10, and watch as it transforms into the true meaning of a ‘personal’ computer.

To do this, you have to be able to trust it of course – so that the operating system gets to know you and can help you plan your time effectively (for example – you get in your car to go to your next meeting, Cortana knows where you are and where you’re supposed to be from the information in your calendar, and will automatically start calculating your mileage and upload it to your expenses. Very minimal input from you.)

Windows 10 will work on a broad range of devices – from phones, Surface Hub, HoloLens, Raspberry Pi…you name it. (See our video series ‘Technology Talks’ when Windows 10 was first demonstrated)

Today’s theme was very much about using sophisticated technology to do more, and to get us all used to this idea, the next demo took an existing application (Maya Autodesk 3D modelling software) and transformed it into something which quite honestly blew me away.

Using a camera which gave the audience the same view as if you were wearing a HoloLens (Microsoft’s virtual reality product designed to work within Windows 10), we saw how a 3D model of a motorbike could be interacted with in the real world, as if it was actually there in front of you.

You can leave notes which the system can pick up – such as ‘can you see what it looks like in orange’. You can put the mirrors back with a flick of your finger, and put your head exactly where the driver would be so you can make sure the ergonomics are good. You can show anyone your view, which makes collaboration easier, and generates faster decision making as a result.

HoloLens was described as a computer that allows us to mix the digital and the real. That demonstration was just the beginning of a sense of what can be achieved with holographics.

Terry Myerson, who demonstrated various aspects of Windows 10 in January, said Microsoft were going to ‘pay tribute to the renewed spirit of Microsoft’ with suitable celebratory activities.

He has every right to make reference to the ‘renewed spirit’ – as much as this event is a great insight into some fascinating new technologies, the anchor is how businesses (regardless of size) will be able to take these technologies and adapt them to improve their everyday working processes, with a particular emphasis on collaboration.

Roll on the rest of the week – and do stay tuned to the blog for more from Orlando.