Home / Insights / Reaction to the iPhone 7: Can it turn around Apple's fortunes?

Reaction to the iPhone 7: Can it turn around Apple's fortunes?

Until this year, Apple never had to report a dip in iPhone sales. Never. Not in almost a decade of smartphone selling.

Then along comes two “see me” reports in a row.

The January and July earnings figures both showed declining revenues from the iPhone. And we’re not talking small declines either:

Perhaps we shouldn’t feel too sorry for Apple’s shareholders, since the tech giant can still claim to earn over $2000 every single second. Plus, how realistic is it to expect Apple to continue to grow at the same levels that they have done in the past? If economics tells us anything, it’s that periods of plateau are inevitable.

However, just because you’re one of the most loved consumer brands in the world, shouldn’t encourage a degree of complacency in your primary products. In a never ending battle to bring new exciting features to the hardware market, you either play the Game of Phones, or you die. Just ask Blackberry.

Today, the iPhone 7 goes on pre-order, having been unveiled at a glamourous Apple launch event earlier this week. So does it look like it will help entice people back to the device that started it all?

Upon unveiling the new phone, Tim Cook said, “It’s the best iPhone we ever made.”

It’s not like I was expecting him to say, “This is the second best iPhone we’ve ever made,” but as soon as he said that, my anticipation escalated.

Apple’s iPhone Twitter team were obviously also chomping at the bit to get the news out there, because they accidentally tweeted this announcement whilst Apple were busy unveiling a new Super Mario game for iOS (nostalgia alert!) and hadn’t got around to the whole iPhone 7 thing yet. 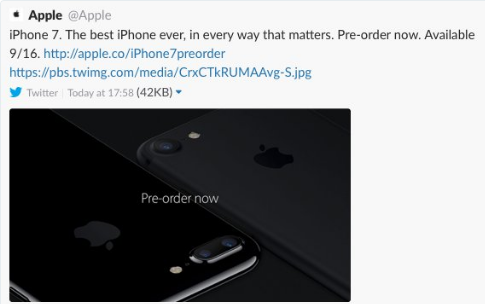 By the way, Apple famously don’t have a company Twitter account, but they set one up especially for the launch event. Don’t bother trying to visit it now as all their tweets are promoted and not on their feed. However, after it appeared that the timing of the tweet had gone very badly wrong, one Apple developer joked:

Anyway, here’s the ‘big news’ about the iPhone 7:

The rumours and leaked information were all spot on; there will be no headphone jack in the iPhone 7. Instead you will have a choice of using the lightning adaptor cable which comes free in the box (it will mean you can’t charge your phone and listen to music through your headphones at the same time though). Or you can use a pair of Lightning-powered Earpods.

Or, in October, you’ll be able to buy ‘AirPods’ – these are wireless headphones which do actually look quite neat. Which is good, since they’re going to set you back £159…

There has been a lot of backlash to the removal of the headphone jack, but when Apple took away our floppy disk drives, our 30-pin connectors and our CD Drives, most of us cried for a few months, and then got used to it.

I suspect this will go the same way, plus it was a very clever bit of marketing to refer to the headphone jack as ‘ancient technology’. As soon as you label it as such, you’ll find a lot of people looking at their perfectly functional, “happy-with-them-until-yesterday” wired headphones in a whole new light.

I really like this poll by Forbes though – upon taking one look at the new AirPods, Forbes asked, “When will you lose your first pair?” I’m going for ‘Whenever I’m outside at the same time as there’s a slight breeze…”

The iPhone 7 should be able to survive in water that is 1m deep, for up to 30 minutes. So if you want to read this blog in the shower, then the world is now your oyster.

Mind you, Apple won’t cover ‘water damage’ in the warranty, so it’s best to err on the side of caution for now. I wouldn’t take it swimming if I were you.

So, there’s no headphone jack and you can drop it down the toilet. Is that it?

Most of the other changes brought to the iPhone 7 are incremental improvements – they’re going to be well received, but they are what you might expect from a mid term ‘S’ model rather than a biannual generation release (the spec jumps from 3 to 4, 4 to 5 and 5 to 6 were huge in comparison).

What would we have liked to have seen? Well, an upgrade from a 720p screen to a 1080p resolution would have been nice. Samsung have offered this for a while, and it does make the iPhone’s screen look dull by comparison.

Many thought Apple might have finally been able to offer wireless charging, which would have been a very big deal.

Design-wise, apart from the removal of the headphone jack, the iPhone 7 is pretty much identical to the iPhone 6. Again this is a break from Apple tradition, which up until now made dramatic changes to the chassis for each new generation.

So why have Apple chosen to make relatively modest improvements for their latest iPhone?

I can see 3 possible reasons:

Either way, the iPhone 7 isn’t going to light many fires (then again that might be a good thing, given Samsung’s recent misfortune with the recall of their Galaxy Note 7).