The Making of Total Secrecy Guaranteed

I was 16 when I first realised what I wanted my career to be.

Well, it wasn’t a career as such. I wanted to be Peter Jackson.

It was 2002 and I’d just bought the extended edition DVD of The Lord of the Rings – The Fellowship of the Ring. On there is hours and hours of footage of in depth documentaries about the entire filming process.

I wanted to be part of that experience so much that I filled out an application form for South Seas Film and Television School in Auckland, and was fairly down the line before sense caught up with me (and by sense, I mean my mum).

I can honestly say that what I’m doing for TSG (and you may mock, but that’s fine) is exactly what I want to be doing right now. I’m working with an ambitious business that wants to go about things in the right way, and who embraces a creative approach. 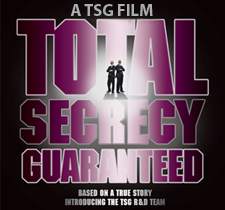 And a creative approach is certainly what we took for our first short film, Total Secrecy Guaranteed.

Total Secrecy Guaranteed is a very light-hearted video, which aims to introduce our unique Research and Development department.

They’re bringing to the IT world some incredibly impressive stuff, and they have a real focus on quality and innovation. There’s also a very unique culture within this department, which this film aims to bring to life.

For us it’s a new way of working. Like most in the industry, we’ve traditionally worked on a project-by-project basis. And whilst that will continue, where we can identify common requirements, we’re looking to build products that work out-of-the-box.

We’re working closely with customers in specific sectors to ensure that we cover all of the features they need to make a significant difference to their day-to-day work.

Listening to our R & D director Mat Peck speak about what the team are doing is something that I hope every member of Team TSG get to do at some stage. He’s incredibly passionate about innovation and working with new technology, and you really get swept up by it. That’s when the idea of creating this Men In Black style underground lab first popped into my head.

For a department that is focussed entirely on the future, I figured that it was only appropriate to add a layer of secret identity within the film (or put them in quarantine, as Product Manager Steve Brand points out in the audio commentary version).

The idea to have the character Jed as a pizza delivery guy who gets mistaken for the new R & D recruit allowed us to play with this theme, and take him on a tour of the main features of the department.

In an attempt to emulate the real life world of movies (is that an oxymoron?) and get one step closer to Peter Jackson incarnation, we have also created a fun ‘making of’ featurette where you can meet some actual members of the R & D department and discover more of the themes emulated in the movie.

It’s also my first presenting gig, and given that I had to edit my own footage, I suspect it will be the last…

I also recorded an audio commentary with Steve Brand, one of our brilliant Product managers – so for more antics from the set and an insight into why we made this movie that involves aliens, agents and bashing things with hammers, have a watch of this:

If you’re interested in learning more about our R & D department and what they’re working on, do pay a visit to www.tsg.com/business-software/sector-solutions