Home / Insights / What can't your smartphone do?

What can't your smartphone do?

As you hunt for the best shopping bargains this Christmas, consider the sales items on this American newspaper advert from Radioshack, dating all the way back to 1991. 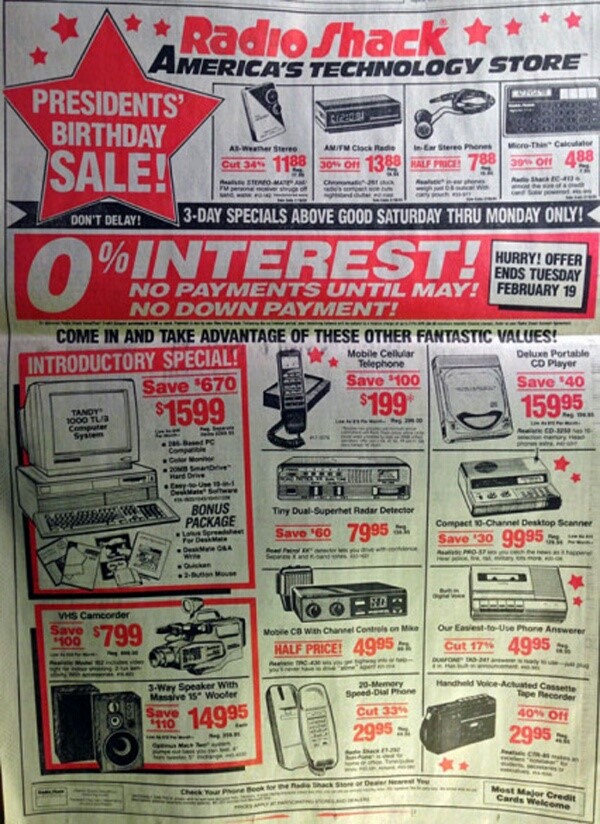 Say you were in the bargaining mood (and pretend we were in the US for a second), wanting to take Radioshack up on every sales item they were offering, it would set you back $3,054.82 – reasonable for a brand new entertainment and communications system? Debateable. In today’s world it would actually cost you around $5,100, if you take inflation into consideration.

You could use your smartphone.

But the fact is, whilst we used to gather our goods separately, technology is taking more of an ‘all in one’ approach. How many out of the items from the advert could you say you wouldn’t consider buying separately, because it’s been replaced by your smartphone?

We seem to be in large approval of ‘all in one’. It’s not as if you can take your three way speaker with a ‘massive 15” woofer’ on the train with you. Well actually you can, and I’ve seen it done, but you deserve the abuse you’ll get from your fellow passengers if you do.

Despite the convergence into single devices, the technology itself is only getting more powerful. It’s amazing to think that there is more computing power in today’s average smartphone than there was on the computer that got the Apollo space mission in 1969 to reach the moon (come to think of it… the year I was born!)

However, if everything now comes as standard in one device, are we really getting the most value? Do you use everything that your smartphone has to offer, enough times to warrant it being an irreplaceable piece of technology? And in doing so have you sacrificed some quality in screen size, lack of keyboard etc.?

Then again…do you care? Or have you adapted for the sake of convenience?

I’m not saying that I get $5,100 worth from my Samsung S5 – far from it. I use it to call, text, take photos, access the internet, check emails and that’s it really…I don’t really take videos, listen to music, watch movies, or listen to the radio. I’ve got other things I would prefer to use for those. But do I like that I could do those things, if I wanted to? You betcha.

People may disagree – you might want a smartphone that just does the things that you want, and you don’t want to pay for the things you won’t ever use. I get that.

But a lot of people want more value out of their technology now. Extras are the norm. And ‘smart’ is where things are continuing to head.

Traditionally, stores like Radioshack (or Curry’s, if you want the UK equivalent) rely on you wanting something specialist for your entertainment needs, and I’m sure they will always have an audience for that.

But, you want your Blu-ray player to have internet capability. You want your toaster to sing, “How do you like your toast in the morning’ (No? Just me?) And you want your washing machine to sync to your smartphone. I’ve just got one of those, and the only way it will change my life more is if it folded and ironed my clothes too. Maybe in a few years time.