Can Sean Parker's 'Screening Room' Save the Movie Industry?

There was one month this year where I went to the cinema eight times. I think that’s perfectly normal, but I’m aware that there are many others who think I’m rather weird.

Despite my stalwart attempt to keep the movie industry going, there has been a steady decline in ticket sales in the last few years. In 2014 things had reached a 20 year low. Movie piracy continues to be a major issue, and on demand TV streaming (Netflix, Amazon Prime..) has gone through the roof.

Movies themselves are becoming TV episodes – it started with Fargo, then DareDevil, and this week I heard the Guy Ritchie flick ‘Snatch’ is going to be made into a 10 part series (though sadly not for UK viewers). It’s a fact – home entertainment is awesome. And it’s a major factor behind the dwindling cinema ticket sales.

Sean Parker, the infamous co-founder of music downloading business Napster, and partly responsible for making Facebook into what it is today (“A million dollars isn’t cool. You know what’s cool? A billion dollars.”), has an idea which he says will help movie studios make more money.

‘Screening Room’ is a service which will allow people to watch films at home, the same day they are released in the cinema. It will require a set up box, costing around $150 (£100) and each new movie will cost you $50 (£35). You then have 48 hours to watch the movie, before it will be deleted from your system.

The revenue will be split amongst Screening Room, studios, and exhibitors.

The idea has caused a rift in Hollywood. JJ Abrams, Peter Jackson and Steven Spielberg are backing Parker’s proposition, whilst the likes of James Cameron, Christopher Nolan, and M Night Shyamalan are all against it.

The arguments in the ‘pro’ corner are that the film industry simply has to adapt with modern digital technology before it becomes obsolete. And by offering this service, they are allowing people who can’t get to the cinema very often (clearly not me) to be able to watch new releases.

“Screening Room will expand the audience for a movie – not shift it from cinema to living room. It does not play off studio against theatre owner. Instead, it respects both and is structured to support the long term health of both exhibitors and distributors – resulting in greater sustainability for the wider film industry itself.”

“There is nothing better than going to the movies and there never will be. But I’m also aware that I have 3 kids and haven’t been to the opening night of a new movie in over 12 years.”

In the ‘against’ corner, the argument is that Screening Room will cut into the cinemas’ ‘exclusivity window’. You go to cinema partly because you can’t watch it anywhere else right? (I’m pleading to the law abiding/ anti-piracy readers amongst you here).

They also argue that films are made to be seen on the big screen, and so they are trying to protect the sanctity of the cinematic experience. “The movie-going experience is something to fight for,” M Night Shyamalan said.

[Side note: I don’t mean to be harsh, but M Night Shyamalan hasn’t had a good idea in years. So I take his opinion slightly less seriously than the others.]

Let’s talk about the cinematic experience for a sec. I wouldn’t go to the cinema 8 times in a month if I didn’t enjoy it, but there are times when it probably wasn’t necessary – Brooklyn, for example, could have been enjoyed just as much at home on the TV. Deadpool was spectacular on the big screen. I wish I hadn’t seen The Revenant on any screen at all. (Leo – I’m really pleased you finally got that Oscar. But this was not your best work…)

My point is that some films rely on the ‘awe’ factor of the cinema experience. That includes many of the movies made by the directors who are in the ‘pro’ column – JJ Abrams’ Star Wars Episode VII, and Peter Jackson’s Lord of the Rings trilogy, are, in my opinion, amongst the finest cinematic spectacles you’ll ever see. Also, every Christmas I’ll go and watch Die Hard at the Tyneside Cinema, despite the fact that the film sits prominently on my DVD shelf.

Next week my ‘Nerdfest’ friends and I (the affectionate name for our cinema club) will be attending the midnight screening of Captain America: Civil War, in IMAX. I can’t wait. To me that will be an unforgettable experience – I’ll be among the first people to see the film in the world, and I’ll be doing so via an outstanding platform.

They said TV was going to be the end of the cinema. They said the same thing about VHS. Neither came true, and that’s because there will always be an audience need for the cinematic experience.

However, I do think cinemas need to do more to make that experience more special for more people. Too many times I’m in the theatre, distracted by vigilantes on their phones, chattering away.

My opinion on these people is merciless. I think they should be evicted immediately, and be given a lifelong ban from that particular cinema. I’m serious. 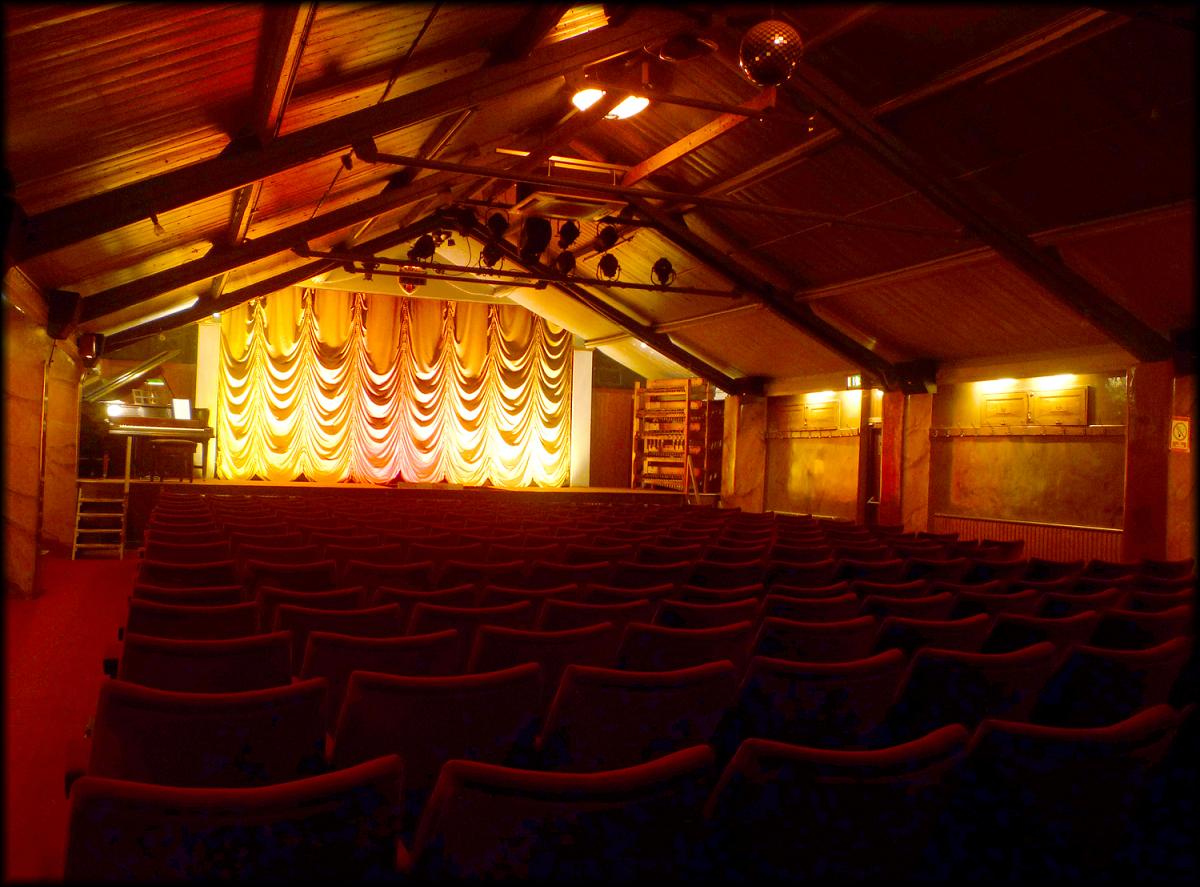 So If I’m watching new movies in the comfort of my own home, I can set the rules, which I’ll expect people to abide by.  The picture on the right is the screen inside the Kinema in the Woods in Woodhall Spa, Lincolnshire – the cinema I grew up in. It’s the best cinema in the world, not least for its zero tolerance towards the apes that can ruin the experience for the rest of us.

Will Screening Room help to combat the growing problem of piracy, which Sean Parker says is one of the reasons for it? I’m not sure about this one. What’s to stop you projecting the movie you’re watching onto Periscope – to an unlimited audience?

And it must be hard to pitch an anti-piracy idea when your name is Sean Parker. Parker was a teenager when he first hacked into the computer systems of businesses and governments, and he was arrested by the FBI when he was 16. Napster was founded in 1999 (when Parker was 19), which allowed tens of millions of people to download MP3 music files before being shut down in 2001 following a wave of lawsuits.

And what about the price point? £100 for the hardware and £35 per movie isn’t cheap. You would need to gather friends round and split the cost to make it more economical than a cinema visit. Still, it’s the only option so far that seems to have roused at least some interest amongst movie studios.

If it goes ahead, Screening Room wouldn’t be the first ‘at-home viewing service’ for brand new films. Prima Cinema currently charges $35,000 for the privilege, plus a $500 fee for each film. I suspect their client list is pretty high end…

The initial reaction to Screening Room – on the studio and distributor side of things – is lukewarm, and that is probably put it kindly. Disney has reportedly rejected it, and the National Association of Theatre Owners is against anything that threatens the theatrical release window. But, according to Variety, Universal, Fox, and Sony are showing ‘serious interest’.

if it does get the greenlight, my opinion is that Screening Room will offer an additional option for audiences, rather than take one away. I will never give up going to the cinema – the experience means too much for me. And I know I’m not alone in thinking that (I asked Nerdfest, and they all agreed).

But I think a lot of users will appreciate the range of choice in which to watch new films. People are watching more and more on demand content, so why can’t this content include new releases, whilst also helping the studios and distributors to keep making the films they want?

What do you think? Will Screening Room keep people away from the cinema? Would you use it? Is the price point an issue? Let me know by commenting below.