Home / Insights / How creative is your environment?

How creative is your environment?

You’ve probably read a lot about Google offices with their giant bowls of M&Ms, big inflatable balls, rooftop terraces, multi-layered leather sofa seats, meeting rooms styled like submarines, slides between floors, mini-golf in the HR department… and perhaps wondered if there is any reason for such randomness, or whether it’s simply the whims of an organisation with too much time and money.

Would it do us any good at TSG to mess with our environment and turn it into a giant soft-play area in the hope of inspiring creativity in our staff?

I believe it would, and I’m finding an increasing body of scientific studies to back-up personal experience.  Let me share a couple of those experiences with you.

I recall going to meditation classes when I was younger, convinced it would help me deal with the stress of my job.

I was told to first empty my mind of all thoughts and to focus on something like my breathing, or visualise a rotating wheel with a dot on it, breathing in as the dot reached the top, breathing out when it reached the bottom.

My mind immediately flooded with questions… “Am I breathing too fast, or not fast enough?  How fast is this wheel moving anyway and what colour is the dot?  Is that even important?”

I found that, by being told not to think about something, all I did was think about that very thing.  My conscious mind, the “higher” functions in the cortex, got in the way of the unconscious mind and stopped it working.

Is that a bad thing though?  Surely the higher order functions of the consciousness should be focused on the task at hand?

Studies using real-time MRI scans of the brain have shown that when we impulse-buy something, the decision to buy is actually made in the parts of the brain that are unconscious… the parts that cannot process language.

The conscious mind is then informed of the decision to buy, and it makes up a reason why it thought it was a good idea.

In a massive feat of ego, our conscious mind deludes itself into believing that it made the decision and was in control all along, whereas in reality it took no part in the decision making at all.

We really are quite incredible creatures when you start to look at brain function.

So why is any of this relevant?  Well the creative process, and software development is exactly that, creative engineering, isn’t just the conscious comprehension of syntax and structures.  It is also problem solving and decision making at a much lower level.

Design and development does not just happen in the conscious mind, in fact I’d argue that most of it happens unconsciously.  If you talk to any developer or engineer they’ll have a bunch of stories of how they struggled with something all day, then went home to sleep only to wake up with the full, and often simple, solution in their head.

Some of the best solutions I’ve found to complex coding problems have been when I’m not actually coding.

These days, when I get stuck on a problem, I simply stop consciously thinking about it and occupy that part of my brain with something else… a workout at the gym, or reading articles in Wired, or watching TED lectures, or DIY, Sudoku, crosswords… anything, in fact, to occupy the part of my mind that thinks it’s making the decisions, in order to let the real work happen, unhindered, elsewhere in my head.

Google’s offices, with all their bright arresting colours, gaming consoles and playground equipment fulfil exactly the role of distracting the consciousness when necessary.  It’s why Playstations and pool tables are such common elements in creative environments.

The second example I’d like to share concerns foliage.  I have a reputation around TSG for being a plant lover.  It’s not undeserved! 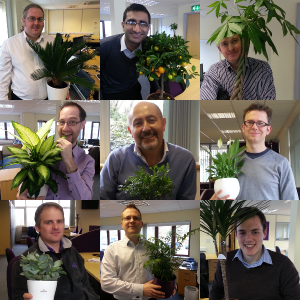 My own observations of the increased output from R&D teams who work in areas with lots of plants have been supported recently by research from Robert Ulrich and team from the Texas A&M University.

From their study, natural greenery not only lowered anti-social and violent behaviour, but in an experiment over eight months was shown to increase male employees’ creativity by 15% and it encouraged more flexible creative solutions from their female counterparts.

It may stem from an evolutionary perspective… we view a green environment as a sign that abundant food sources are probably close by and thus with less need to fight for scarce food, we can forget about that for a while and have more opportunity to relax, giving us the spare capacity to be creative.

Whatever the reason, plants brighten the office and give you something to look at when you’re thinking, or more importantly, not thinking.

My R&D team now have plants to look after and look at (photo evidence above) and I’ll be making sure we get a few more to fill our lines of vision in the offices.  You might want to do the same, if you’re feeling creatively constrained…