I think about technology Daley...

The other night I was staying at Close House Hotel in the North East and in all the gin joints in all the land, who should walk in other than the legendary Daley Thompson. 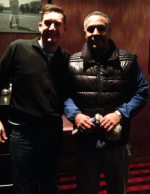 Aside from becoming a temporary paparazzo and getting the obligatory photo, it got me thinking….

I remember a certain video game called ‘Daley Thompson’s Decathalon’ in the wake of his gold medal achievements at the 1980 and 1984 Olympic games, which was released on a Commodore 64 (the one where you had to insert a cassette tape to load the game and blow on it should it freeze….. by the way kudos to the innovator who first discovered that technique).  The game worked by pressing two keys alternately as fast as you could to make him run – I am sure many of you will remember the hours spent perfecting that technique.

That was nearly 30 years ago…. and it put me in a melancholy mood about how far technology has come since then.  I tweeted the photo from the iPad so instantly informed my followers of my celebrity spotting, before using said device to book a weekend tee time on the golf course.

We’re now living in a world where we don’t even need joysticks or controllers to work games (like the Xbox Kinect – and check out this video which shows how you can use Kinect with Microsoft Dynamics NAV.

Technologies such as Aurasma allow interaction with images and Google Goggles allows you to point your smartphone at a building, piece of art or a bottle of wine and instantly retrieve information from the web.

Google Glass, set for release at the end of the year, uses a headset to relay messages from the real world to the virtual world.  So, for example, you’re wearing the headset, you’re looking at a mountain, you’re thinking it’s pretty picturesque, so you say ‘Take a photo’.  And it does….

Where will we be in another 30 years’ time?  Assuming Skynet hasn’t terminated us all, will I be sitting in a bar (that part’s a no brainer) thinking I’d like to book a game of golf and a list of tee times presents itself in my thoughts – and I can simply think about the slot I want and it’s booked…

Going even further, will an automatic reminder in my brain wake me up in time, with my first thought being that I am playing golf in 1 hour and I’d better get a move on.

Sounds crazy but as a boy tapping two keys to make a block character run on a screen was cutting edge.  Also, if someone would have told me what I would have been doing with technology today I would have thought they were a bit crazy….

I’d be interested to hear your thoughts on what technology could be doing for us by 2043…..and what will we be unable to live without?

Leave your thoughts in the comments section