Recently I had a ‘heart in mouth’ moment when I managed to accidentally delete my entire collection of archived emails from my PC – emails which I keep for fairly significant reasons.

I’m still none the wiser as to how I actually did it, but off went my PC to our brilliant IT technicians so they could coax the emails back from the black hole in which they entered.

For an interim replacement, I was handed a rather shiny new toy – the Microsoft Surface Pro.  After navigating my way around the new Windows 8 operating system, I soon realised that this small device could do everything that my heavy duty PC was capable of.

I was with Steve at the Microsoft World Partner conference in Houston last week, where devices and mobility were high on the agenda.  Speeches and workshops were brimming with the Microsoft mantra of ‘one operating system (Windows 8); multiple devices’.

So when they demonstrated the new Nokia Lumia 925 on Windows Phone, and how it was intended to fit into a seamless experience of phone, tablet, and PC being used in unison, I decided to buy one.

When you consider that I’ve had a long and adoring relationship with Apple – having had an iPhone for the past 5 years and I’ve been a prolific iPad user for about 3 – that’s a pretty dramatic decision.

However, one of the things that has frustrated me over the years with Apple is the singular experience on each device.  I can’t, for example, sync an appointment on the go, nor can I invite attendees to a meeting from my iPhone.  I spend a lot of time out and about so staying in touch is really important for me.

The other thing that grates me about the iPhone is the battery life, or lack thereof – it might be just me and the way I use it but I’m pretty sure that going from 100% – 15% in the space of four hours when my only activity was checking emails, is fairly below par.

Despite this, it was going to take a lot to drag me away from Apple – I genuinely love the interface and the sheer wow factor, and I’d never once been tempted by a Windows phone before.

When I saw the effects of the Nokia Lumia 925 as it was demonstrated with the Windows operating system across different devices, I made a conscious, mental decision to do things differently from now on. 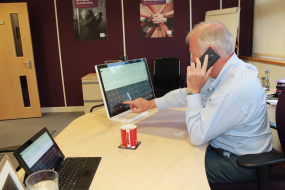 I knew that it was going to take some effort to become accustomed to a new operating system, but I’d got used to the Surface pretty quick and had really seen the benefits of that.  Plus if this phone was going to further benefit me from a business perspective and get me into more of a ‘joined up’ approach, I was going to give it a damn good try.

It was also a conscious decision to think long term – having learnt more about what Microsoft are planning to do, I could have either go with the flow, or push against the tide.

Having only had it for two weeks I doubt I’ve even begun to explore the many features and apps of the phone – but here’s a run down on the major benefits so far:

It’s not all positive news – I’ve only got 16GB of storage on this phone, half of which I had on the iPhone.  Then again, I had 2500 songs stored on the iPhone and I probably only ever listened to 10% of them.

So again it comes down to this conscious decision I made – I’ll simply make more productive playlists on the Nokia…..and probably filter out some of the songs which are more of an embarrassing nature (or so my son would say).

I’m also not a fan of the volume button on the outside – it’s not designed in the best way and I’m always muting it accidentally in my pocket, which does mean a few calls get missed (it doesn’t sound like a very good excuse to the people I miss calls from but it is genuine!)

However, based on the reason that I bought it in the first place – a richer experience for business – I think Windows are onto a real winner here.

At the conference, Microsoft COO Kevin Turner talked about how they were aggressively going after the smartphone market, now that they are third in the world behind Google and Apple.

I think that as long as Microsoft are clear in who they target first (I believe their market is people who are business minded and need something that keeps them in touch whilst they’re on the go) and wholeheartedly invest in a long term strategy of a seamless device experience, then they definitely stand a very good chance.

As for me, I hope this phone’s battery life remains strong!