Brad Smith (Microsoft’s General Council and Executive Vice President of Legal and Corporate Affairs) made a very valid point when he stepped up to make the first keynote address of Day 3 at the Microsoft World Partner Conference.

He said it had been an extraordinary year.

He was talking about IT Security and Data Protection, but actually this was a theme that spread throughout Day 3 – the capacity for transformational change has never been higher.

And technology couldn’t play a more important role in this – particularly Cloud technology, and what we can do with it.

The story of the keynotes on day 3 made it clear that the capacity for change really encompasses three key areas:

Trust in the Cloud and Data Protection

The French government sought the contents of the emails of the two suspects, which were Microsoft managed accounts. Microsoft handed over the data within 45 minutes, according to Bloomberg. At the time, Smith said, “We’re trying to manage 21st century technology issues with laws that were written in the ’80s and ’90s.” (via the Huffington Post).

Social media was also used to galvanise over 2 million people to take to the streets of Paris and express their views about freedom of speech.

The hack (over 100 terrabytes of data) was traced to North Korea, who reportedly wanted to stop the release of the Hollywood movie, ‘The Interview’. Microsoft and Google got together to release the film online, to show support for freedom of speech. 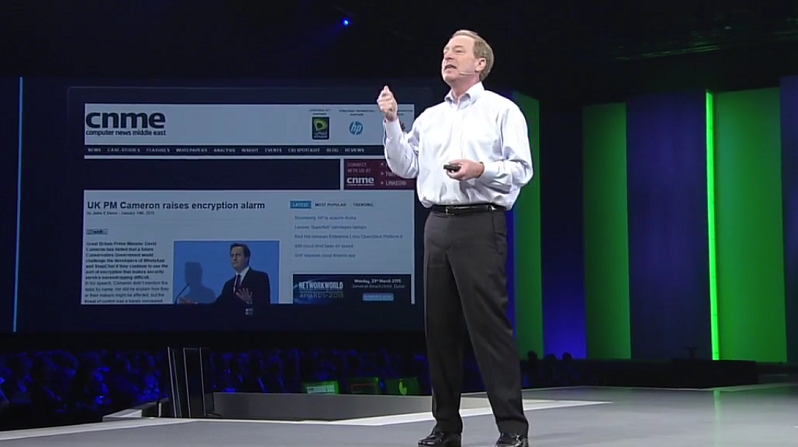 Right now, new laws are being proposed relating to data, IT Security and encryption, and they have also raised the question of being able to access that data from other countries.

Why is this all happening now? Smith mentioned Edward Snowden, who managed to disclose classified NSA documents. Whether trust in technology has become an issue purely because of this, I doubt it, but when it comes to the Cloud, a lot of people I talk to certainly have misgivings about putting their data into the internet.

Myself and Paul Burns talk about this topic in the second episode of ‘Technology Talks’ which we released last week.

Smith asked what we could do to advance the cause of ensuring that the world can trust the technology that is being created. The internet is going to be the major player here, and Smith states that the internet must be governed by law; updated laws that understand the fact that the internet has become something it wasn’t built for (i.e a portal for physicians who were researching information). Today it’s used from everything from videos of biting toddlers to national defence.

Here are the four areas of Cloud that Microsoft have pledged to focus on:

The Cloud is where the growth is (this is something COO Kevin Turner said in the closing keynote of the day) but in order for businesses to truly use all of its potential, they have to be able to trust it.

Microsoft have pledged that they will keep your data secure, and this is refreshing to hear from such a major holder of people’s information.

“In a world where technological and business model changes are accelerating, finding an opportunity to disrupt – a competitor, an industry or even your own company – is more achievable than at any point in history.” Steve Guggeheimer 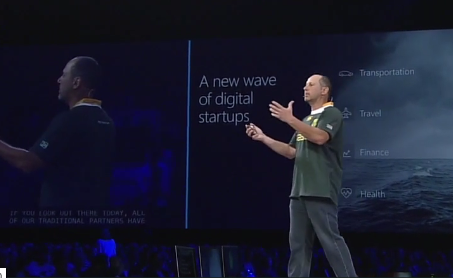 Disruption – something we should all be thinking about according to Microsoft. The biggest tool at our disposal? The Cloud.

Guggs (as he likes to be known) gave the example of the ‘Internet of Cows’ (appropriate considering it was Cow Appreciation Day this week).

Israel produces more milk per cow than any other country in the world. How do they do it considering the country is mostly desert?

The Israeli farming industry has ‘farmed’ (sorry) the data in such a way that they are able to tell instantly what the milk quality and quantity is, get information about a herd’s health, and other metrics through a sensor attached to the cow’s neck. The data is shared industry-wide for everyone’s mutual benefit.

Guggs mentioned other companies – startup companies – who are looking to disrupt the industry giants. Muzik uses Bluetooth to enable you to play the drums without and actual drum kit. Jet, a US based membership savings club, is looking to cause the same amount of disruption as Amazon to the retail market.

Suggs also mentioned Salesforce.com – a fierce competitor to Microsoft’s CRM offering – and said that even though there is some obvious overlap, they are now working together to cause disruption.

One of my favourite examples is the Dollar Shave Club. A unique idea and one brilliantly produced online video catapulted their disruption of the shaving industry.

As this article in ‘Fast Company’ states, “Ten years ago, Dollar Shave Club wouldn’t have stood a chance against the titans who control the men’s razor market.”

But by offering something different, founder CEO Michael Dubin took his company from a $4m business to an expected $120m by the end of this year.

So definitely – the environment is right to disrupt. Whether that’s the industry, your competitors, or your own company.

And because so much technology previously only accessible to the Golliaths is now within reach of businesses of all sizes, I won’t be surprised to see a lot more Davids breaking some new ground this year.

Perhaps Nokia, who just yesterday announced they are looking for a new hardware partner to get back into the phones business….

As the Salesforce example goes to show, Microsoft have certainly broken down a lot of barriers when it comes to working with their competitors. Which is why I was particularly looking forward to COO Kevin Turner’s closing presentation.

This was Turner’s 10th WPC, and he’s always been known for his energetic style, memorable one liners, and a good deal of aggressive competitor bashing. So in this era of Microsoft going all soft and friendly with their fiercest rivals (they’ve even abandoned the ‘enemy list’ this year – i.e employees from Salesforce.com, Amazon and Google among others who were banned from ever attending before) what was Turner going to say?

Well, he didn’t take it easy on them. Here’s what he said about Google after announcing Microsoft had ‘lured’ over 1,252 enterprises back to Office 365 this year after they defected to Google Apps:

“We’ve got to rescue the rest of Google Apps customers and throw them a life preserver. We have to win every single deal against Google.”

He also accused Google for not respecting their customers’ privacy enough, and he took a similar stance on Amazon Web Services, Microsoft’s Cloud competitor.

However, whilst he acknowledged Microsoft and their industry competitors are always trying to ‘take their share of the wallet’, he also added, “But the reality is we’re a better company when we reach across the aisle.” He gave the example of the Office app for iPad, and said initiatives like this will continue. 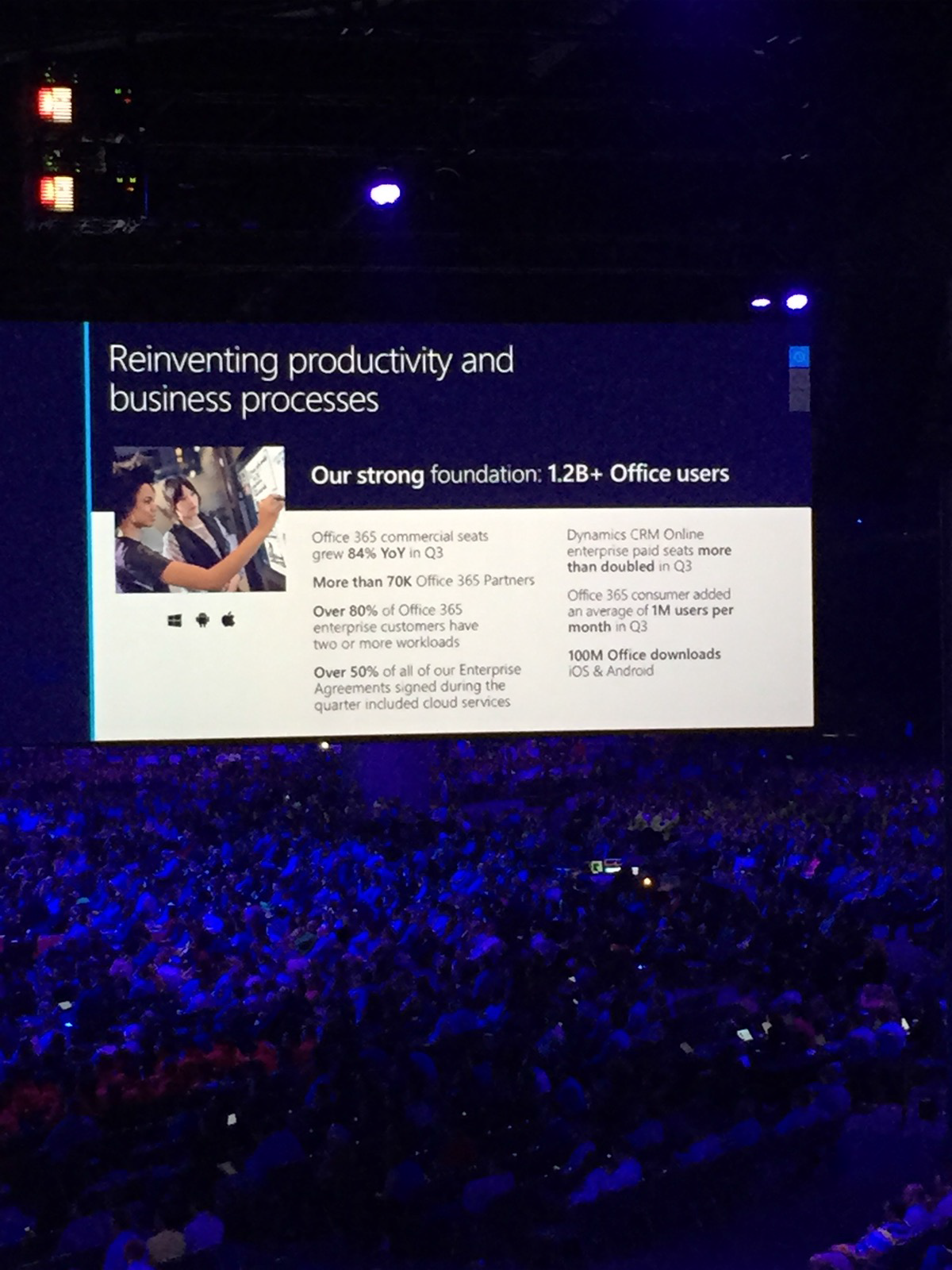 Echoing Guggs’ earlier comments, Turner talked about the disruption of industries at a record pace. He said Microsoft’s technology would help the disrupters, and help those who weren’t moving fast enough. The Cloud, and the mobility it brings, would achieve this.

This a theme that really resonates with me. I’ve always believed that if you’re not using the benefits that new technology can bring, then as a business you’re moving backwards.

This isn’t about plugging every piece of new technology that becomes available straight into your business – it’s never been more important to plan carefully what areas or processes you need to improve, and how the technology can help you get there.

Which is why it was so brilliant to hear the words of Satya Nadella in the conference’s first keynote: he is passionate about helping businesses make transformational changes using technology. But let’s look at what processes need reinventing first, in order to maximise the effect the technology can bring to your productivity.

What capacity for change can you achieve?