Office 365 New Launch: Microsoft To Do

Since it came about, Office 365 has continued to add inventive apps to its portfolio at no extra cost. First came the traditional Office productivity suite, the apps like Word, Excel and Outlook that businesses across the world are reliant on. Tools like SharePoint, Skype for Business and OneDrive were included before new additions like business social networking platform Yammer came along. Power BI, Flow, Planner and a number of additional innovative applications were added to the toolkit more recently, and only a couple of months ago we saw collaboration space Teams enter the fray. Now, meet the latest innovation: Microsoft To-Do.

Launched in preview, Microsoft To-Do is an “intelligent task management app that makes it easy to plan and manage your day” according to Microsoft, and officially succeeds Wunderlist. Microsoft acquired the latter in 2015, and To-Do comes from the makers of Wunderlist.

The online world isn’t short of to-do list style applications and services; Trello, Wunderlist (which still exists as a standalone app, but will eventually be retired), Todoist, Remember the Milk and Clear all have a decent market share in the straightforward to-do list area. To-Do is Microsoft’s branded, hosted solution and has so far received rave reviews.

Microsoft To-Do has a simple, elegant interface but adds a few useful functionalities without making the app too complicated to bother using. Creating tasks is as simple as typing them in and hitting enter, and you can leave it at that or you can assign due dates and even reminders. Think of it as a cross between Trello and Microsoft Planner. 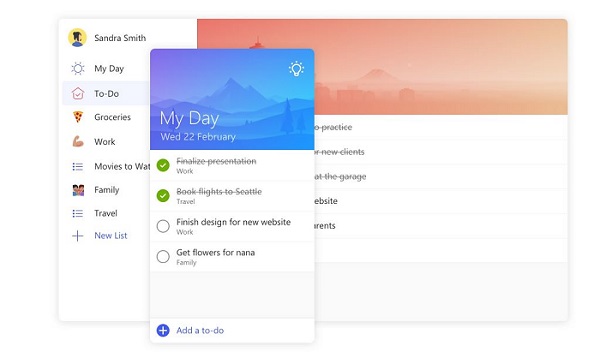 Although Microsoft has big plans for To-Do – more on that below – the company hasn’t restricted To-Do to just Office 365 users; anyone with a Microsoft account can use the service. This means it has business and personal applications, so you can have your work to-do list in front of you and quickly access your grocery shopping list. It widens Microsoft’s scope of potential users.

With Microsoft To-Do, you can make it look and feel exactly how you want to. It makes good use of white space, which stops the app looking cluttered. But you can add your own header image and choose your colour palette to personalise your dashboard. It’s not exactly ground-breaking, but it’s a nice touch that some users will appreciate.

An interesting feature is the intelligent suggestions. While I’ve not had an intelligent suggestion in the few days I’ve been using the app – which is a testament to how varied my job role is – this is based on tasks you undertake on a regular basis. It’s great for daily reminders, or those niggly little tasks you might forget. Your tasks from previous days which you’ve set a reminder on are also included in there.

Microsoft has already confirmed that it will add more functions in the future, including the ability to share your tasks. Naturally, To-Do will also integrate heavily into Office 365 applications such as Outlook. The integration with Outlook – the first planned – will automatically sync your Outlook tasks with To-Do and allow you to manage your workload in both apps.

This is another great addition to the Office 365 portfolio. We only expect it to get better from here so if you haven’t trialled To-Do yet, give it a go. And watch this space for further developments