Home / Insights / Out of Time

So this is it. This is the end of the line. We’ve known about it for a while and now it is finally upon us.

This is your last chance to see one of the most spectacular sights ever.

Some of you may disagree, but that’s ok.

What am I talking about?

For those of you don’t know, this is an aircraft.

Yes, I admit it, I am slightly obsessed with aircraft, and the AVRO Vulcan is at the top of my tree – I simply love it (and I’ve got the car sticker to prove it).

There is just one airworthy AVRO Vulcan in the world, XH558: the Spirit of Great Britain. 106 feet long, 111 feet wingspan, with four Rolls Royce Olympus 201 engines collectively producing 68000 lbs of thrust. Any way you look at it, she is awesome.

The Vulcan is a veteran of the Cold War. Designed and built in the 50s, the aircraft was our nuclear deterrent, as part of the V-force alongside the Valiant and Victor bombers, a role served until 1969.

After that the Vulcan took on a range of duties, alongside that of a non-nuclear bomber, including air to air tanker and reconnaissance. Perhaps the Vulcan’s greatest moment was in 1982, when a lone aircraft flew an 8000 mile, 16 hour mission to bomb Port Stanley during the Falklands war.

The Vulcan fleet was retired by 1984, with just one left flying – XH558. Hers is a great story, which we don’t have space for here, but you can read in full on the Vulcan to the Sky (VTTS) website.

But this year is her final year of flight.

First is that aircraft are maintained based on flying hours (time spent flying is recorded, and much like miles driven in a car this determines when a service is due).  The XH558 is already more than 10% over what any other Vulcan has ever flown, which brings with it potential safety issues.

Secondly, the skills and expertise needed to keep her flying are becoming scarce, making it harder to service and maintain her. In short, she is out of time.

This is quite a moment. It’s sad, but in reality always inevitable. She couldn’t go on forever.

Sure she will survive and become a grounded museum piece, there are plenty of Vulcan’s in air museums across the world. We’ve got one just a few miles away from TSG’s head office in Gosforth. However, it is just not the same. She’s meant to be in the air. 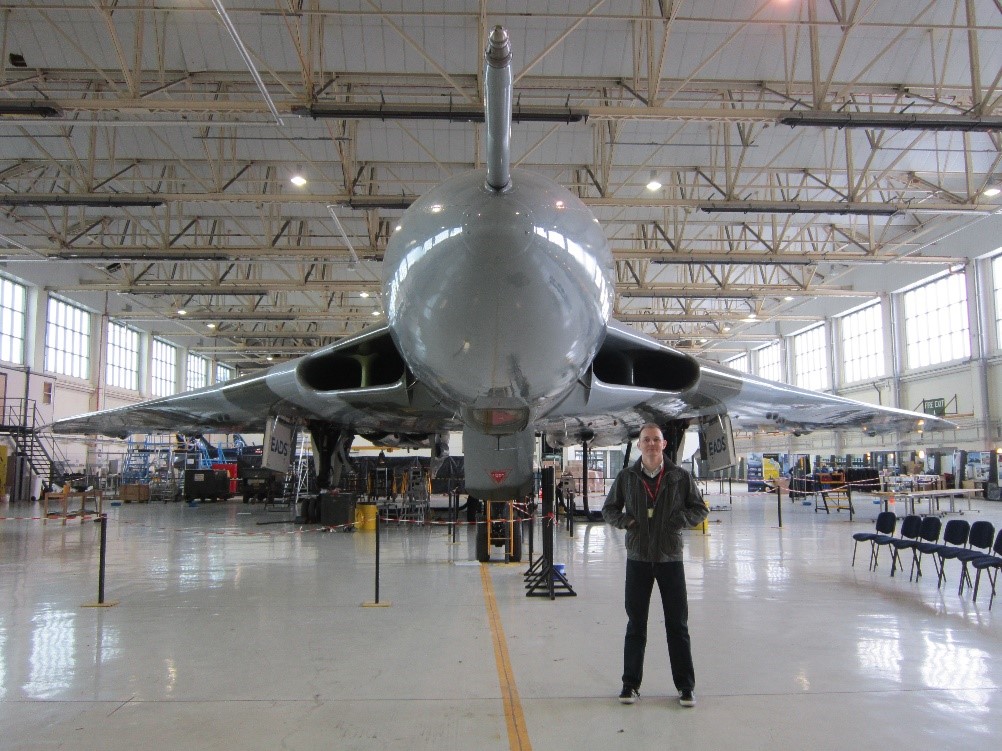 If you have never seen her in flight, you are missing a real treat. Now (and this is just my personal opinion) forget your Red Arrows (yes they are also awesome, but not in quite the same way) and anything else you might see at an air show. Nothing quiets the crowd and gets their attention like the XH558. I’ve seen her a few times and as soon as she arrives, people go silent…and watch.

I even visited her once at her home in Doncaster, which was a unique experience. You don’t get a true sense of scale until your standing right next to her. She’s big (REALLY big) and awesome with it (did I mention that?). What makes her truly amazing what she can do when in the air and how graceful and nimble she can be.

I could go on and on, but I won’t. To see what I am talking about, take a look at this video of XH558 taking off from the RAF Waddington air show in 2014 (turn your volume up, sit back and enjoy).

It has taken a skilled and dedicated team of people to keep XH558 flying this long; after all she is now 55 years old. However, time has caught up with her and no amount of skills can keep her flying safely. She is awesome, but unfortunately she is out of time.

And that’s the thing with technology, eventually time runs out. As much as products like Windows XP and Windows Server 2003 have served businesses well over the past decade and are renowned for how robust they are, they just can’t be kept on.

Here at TSG we have a dedicated team of highly skilled engineers; really smart people who know a huge amount about IT. However, as with XH558, no amount of skills can keep Windows Server 2003 flying safely.

It has reached the end of the line, Microsoft are about to stop producing security updates and fixes, which potentially means any system still relying on this after July 14th 2015 will be vulnerable to all kinds of threats.

Now Windows Server 2003 is not going to just stop working on July 14th and it is possible to keep using it.  However in the same way that XH558 could keep flying, there are some significant risks.

As Richard Adams talked about in his blog in February, things could get ‘super bad’ as the potential threats to Windows Server 2003 are already real.

Microsoft have been talking about this for a while and if you haven’t acted yet, now is the time. Give us a call and have chat to one of our experts about your options, I’m sure we can help.