If you’re like me, you’re bursting with excitement about the upcoming World Cup 2018. I’m not sure it’ll live up to the spectacle of the Brazil World Cup, which is arguably the best sports tournament I’ve witnessed in my lifetime, but it’s still exciting nonetheless.

Naturally, predictions have been flying around about how far England will go and who’ll win the tournament. France have been hotly-tipped to succeed and it’s easy to see why, given the players that haven’t been taken to the World Cup – including Benzema, Coman, Martial and Debuchy – could probably tank England’s first team (sorry, diehard England fans).

Experts from around the world and fans alike have cast their votes on the biggest winners and losers of the tournament. Many of our predictions are based on a number of factors: our knowledge of the teams’ histories, the teams’ current forms, their standout players and their likely opponents. Some have even used their adorable ‘psychic’ pets to predict the World Cup 2018 winner…

Our Business Intelligence (BI) partner Qlik has created an app that adds a layer of fun and competitiveness to our predictions. The Choose Your Champion web app allows you to select your winners at each stage, from the group winners and runners-up to the knockout stages, all the way up to the final and third-place playoff. True to its form, Qlik has also done some of the prediction work for you, visualising the teams’ recent form and world rankings and predicting who is most likely to progress from their groups and win their knockout games.

Take the below for example; I’ve picked Brazil to win Group E, and Mexico to be Group F’s runner up, meaning they’ll meet in the last 16. I’m presented with the handy graphic that gives me Brazil and Mexico’s likelihood of winning the knockout match. As you’d expect, Brazil’s likelihood of winning the match is 72.3% thanks to its high standing in both FIFA rankings and the lesser-known, more complex Elo ranking. It also works out the average goals scored and conceded in the teams’ games played in the 2017/18 season, which can differ; for example, Brazil’s calculations are based on 13 games, whilst Mexico’s are based on 28. 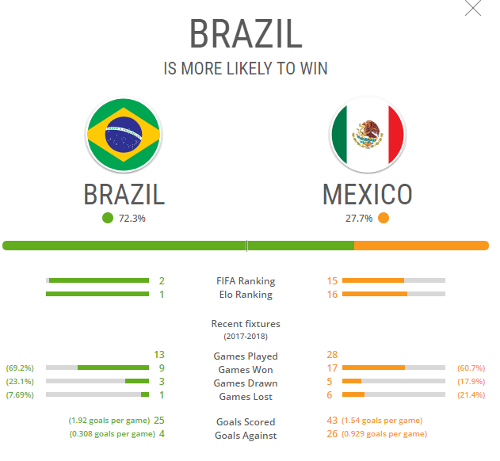 For the most part, I think the Qlik app has its predictions spot on and indeed, I’ve gone with most of its recommendations. Sometimes, however, it throws in a curveball. Controversially, I’ve gone for Belgium to beat Brazil in the quarter-final, despite Qlik strongly recommending that I go the other way… 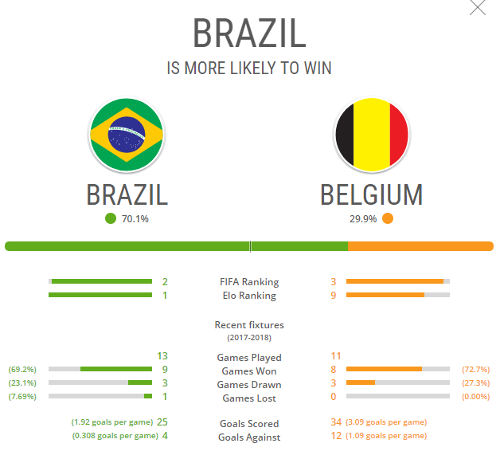 My best guess is that the teams’ world rankings are weighted more heavily than their recent form, because Belgium have significantly outscored Brazil in fewer games. Belgium also haven’t lost a game this season, although they concede on average a goal a game compared to Brazil’s 0.3 per game. Sorry, Qlik, but I’ll have to defy you this time.

I’m sure you’re dying to know how England will get on. Well, I’ve got England to face Colombia in the last 16. In terms of stats, Colombia and England are close, as are their likelihoods to win the game. Colombia edges it with 53% so unfortunately friends, I think England will only go as far as the first knockout stage and will have their hearts broken by James Rodriguez. It could be better (or worse, depending on your outlook) as my colleague, BI expert and fellow football fanatic Stu Wannop has England progressing to the quarter finals…only to be knocked out by Germany. Ouch.

Here’s what our Business Intelligence Specialist Stu has to say:

“Predictive analytics are not only really enjoyable to work with, but they can help you realise all kinds of benefits. Here, we’ve got the whole World Cup mapped out, and I’ll be keeping check on how my predictions are looking. Beyond the world of football, we use predictive analytics to shape the future of our business. You can use data not only to predict how you’ll perform, but to understand what is and isn’t working for your business, and make changes based on that.

“Visualisation is also really important. It brings your data to life and helps anyone understand, interpret and action it. Using the Qlik Choose Your Champion app as an example, those numbers would be a lot more confusing they weren’t wasn’t accompanied by the graphs.”