In May this year, I had the pleasure of attending Qonnections, Qlik’s annual conference in Dallas, Texas (yeehaw).

It’s the perfect recipe for a successful event. Start out with Qlik, the leading business intelligence and analytics platform, then mix well with industry experts, customers and data evangelists. Sprinkle liberally with numerous breakout sessions of all shapes and sizes, and garnish with some keynote speeches. Bake for 4 days in the Texas sunshine and enjoy with a few beers. That’s pretty much what this fantastic event offers up every year.

Something which was particularly brilliant about this year’s conference, both for myself and my business intelligence team, was that our talent identification solution for Blackburn Rovers was featured in Qlik’s showcase. It was an extra special project for me as a lifelong Rovers supporter! 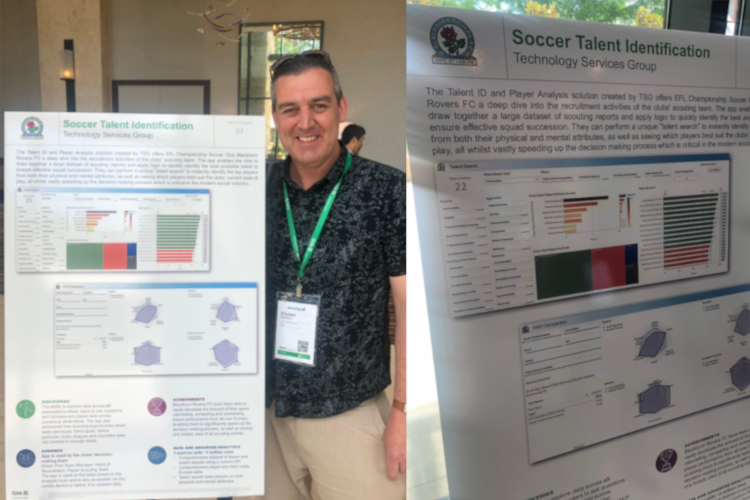 As a leader in the Gartner Magic Quadrant for BI for lord knows how many years, it’s only right that Qlik shared its thoughts (as the team did so with gusto and passion at this year’s event) on the key market trends that are affecting the business intelligence and analytics industry.

So what did I learn? What’s in store for businesses and how are we going to use and interact with data, both now and in the future? Here are the key topics Qlik covered:

Data democratisation means that important data is accessible to everyone and there are no “gateways”, such as closed-off IT departments, that create bottlenecks and stop the right users getting access to the right data, at the right time.

This ultimately means that people should have one easy way to both accessand understand their data, therefore expediting the decision-making process. Previously, data was “owned” by the IT department, which created a barrier in making the right reports available immediately, allowing users to ask the right questions (this is known as point-of-decision reporting).

Unfortunately, it’s been this way for a number of years, and there are still some who think it should remain that way. Using a tool such as Qlik means that businesses now have the ability to distribute data to significantly more users quicker but, crucially, in a governed and secure way.

There is still a concern amongst many businesses that the misinterpretation of data by non-technical employees could actually hinder progress. Bad interpretation of data leads to bad decisions, and that’s a valid concern. Look at the 2016 US Presidential Election – it was the poor interpretation of polling data which ultimately cost Hillary the presidency. I could mention some calamitous data-led decisions in relation to Brexit but I think the less said, the better. Moving swiftly on…

Data Literacy for all

Yes, I know. It sounds like a quote from a Three Musketeers Netflix box-set spin-off, but, this new Fourth Industrial Revolution skill is vitallyimportant to address. As I’ve mentioned in a previous blog, data literacy is a person’s ability to “read, work with and argue with data”.

For the workforce to be successful, both now and in the future, it will need strong analytics and data literacy skills. The twist is, this is not just for data scientists and data analysts. It starts at the top, and business leaders also need to improve on how they read and interpret data.

A recent survey conducted by Qlik shows that less than a third of managers, executives and directors class themselves as data-literate. As these people tend to make the big decisions, this is a frightening statistic and one that needs to be tackled head-on.

Some believe it’s an “age” thing, arguing the younger generation coming through will be naturally better at picking this up since they’ve been using smartphones since they were about three years old. Again, this is simply not true.

The second chart below doesn’t really show any significant skew towards an “older generation” being less data-literate. You can discover more about this survey and interact with it yourself on the dedicated data literacy website (It’s visualised in Qlik Sense, of course…) 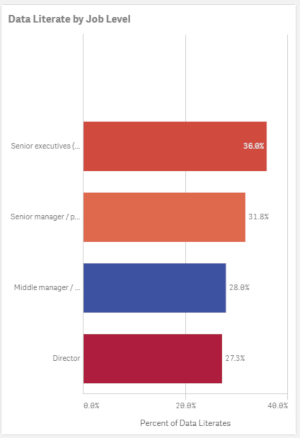 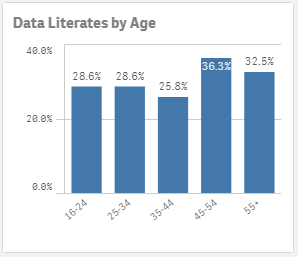 The thing I love about Qlik is that it met this challenge head-on, and was one of the first organisations to address it. Qlik has created its own data literacy project and I highly recommend you take a look.

Anyway, we now look at our third major BI trend…

I first became fascinated by AI a couple of years ago when I saw Google’s AI, AlphaGO, giving the undisputed world champion of GO! what I can only describe as a “right pasting”! It became clear that the technology is there and has advanced significantly in only a couple of years, but the conversations nowadays are skewed towards ethics and not capabilities.

Will AI take over jobs? Yes, some I suppose, but the net effect will be positive, I’m convinced of that. But that’s for another blog…

Artificial intelligence is pretty much THE most disruptive force in technology we’ll see in our lifetimes, period. At Qonnections, I witnessed some of the amazing work Qlik has been doing with its Qlik Insight Bot™, which allows for conversational analytics. If you believe the analysts, about a third of business intelligence enquiries will be done through conversations rather than the traditional point-and-Qlik (pardon the intended pun).

Rather than rant and rave about just how great the Qlik Insight Bot™ is, have a look here..

Most of you reading this will work for an organisation which is either just starting on its data journey (yes, don’t worry, most organisations are still paralysed in a world of Excel spreadsheets), is already there (congratulations!) or perhaps is somewhere in-between.

What we all have in common (and I include TSG on this one) is that with more and more data available, both within a business and outside of it, we have a huge opportunity to leverage the data we have and turn it into a true business asset. With just the right technology and right skills, the future looks extremely bright.

Why bother with BI?

A lot of people always ask me why they should start a BI project. Previously, my answer would always be something along the lines of the advantages of getting all your data together in one place, which helps you make faster, better decisions with more confidence. Previously, businesses would use analytics to gain a competitive advantage over their competition, because there’s a good chance other businesses hadn’t quite grasped the nettle yet.

What a difference a year makes. Now businesses need to make faster decisions based on facts, supported by experience – not to get ahead of the competition, but to remain competitive at all. In other words, embracing data is essential to your business’ success.