Home / Insights / Social Media & the General Election: How Much Influence Did It Have?

Social Media & the General Election: How Much Influence Did It Have?

So the dust has settled on the general election and MPs are now installed in the House of Commons to do their public duty to serve their constituents.

This was touted as the first major UK election to not only be played out across, but also influenced by, technology and social media. Out of curiosity, how many of you completed one of the online ‘manifesto tests, such as ‘Vote for Policies’?

At the end did you discover that your allegiances were as you thought or actually misplaced? And did you stick to your guns or were you swayed by the results?

According to the BBC’s technology correspondent, Rory Cellan-Jones ‘for the most part, social media followed the campaign rather than led it’. In 2010 polticians were really just getting to grips with the likes of Twitter, but now, as Rory says, “Ed Miliband had hardly unveiled his tablet of stone before the hashtag #edstone was a trending topic”.

Does this mean technology actually did have a direct impact on the result of the general election? According to most analysts, probably not. At least, not to an overwhelming extent.  Twitter users don’t exactly make up the same demographic as the electorate for a start, and for most, social media was really a way to keep up with the news of the election and listen to politicians say mean things about each other on another medium. 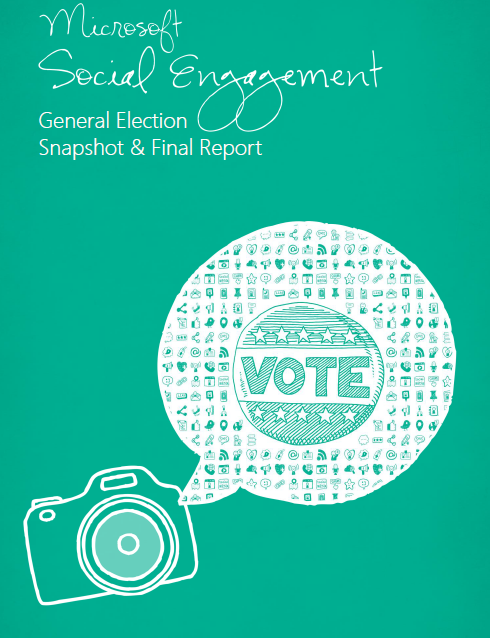 Not exactly in line with the outcome of the election.  However, insights from Microsoft’s Social Engagement tool – published in their report – suggest that activity during the final hours before voting gave a better indication of the outcome than the opinion polls, which of course have since gained notoriety for how wrong they got it.

According to the report, there was a clear swing of positive sentiment toward David Cameron, and Labour’s ‘buzz’ steadily declined in Scotland.

And the Lib Dems saw little online activity in the South West, which has traditionally been a stronghold for the party.

All very interesting, but could Ed and Nick have done anything about this in the run up if they’d known?

In the 2012 US presidential election Barack Obama spent $47m on digital compared to Mitt Romney who spent only 10% of that – Obama ended up generating twice the amount of Facebook likes and 20x more retweets.  And we know how that one worked out…

Of course, that was in the days before sophisticated social media analysis tools were readily available so it’s difficult to analyse how much of an impact this actually had.  Besides, more mentions doesn’t automatically mean more people will vote for you.

Let’s go back to the UK general election again.  According to the NewStatesman,

“Miliband was also the most talked about politician, with ElectUK data recording that he was the subject of 694,000 tweets, compared to David Cameron’s 616,000. However, the situation was a little different when it came to the most talked-about parties, with UKIP on top with 945,000 mentions.”

However, in the last couple of months, Microsoft has evolved their ‘Social Listening’ product into ‘Social Engagement’.

A subtle but critical shift, because the focus has moved from simply being in a position to analyse, to being perfectly placed to respond and influence. And according to one of our leading CRM specialists, ‘it’s about as sassy as tech gets’!

The challenge for some may be in simply getting to grips with the relevance of social media, but it’s starting to become difficult to ignore with over 72% of all internet users now active on social media.

In fact, at a recent presentation given by the MD of one of our local newspapers, it was interesting to see that, with what he called ‘Newsroom 3.0’, response on social media now influences which stories make it into the print edition of the paper.

For a better understanding, and accepting that it may not be relevant for all businesses, this demo on Marston’s (yep, the pub operator) from Microsoft’s Convergence conference show what can be achieved.

It also features Satya Nadella himself, so it must be a big deal.

So, in spite of fruitless attempts to ‘get down with the kids’ and appearances on YouTube with the likes of Russell Brand, Microsoft’s powerful software has come too late for most of the parties – and who knows what this mysterious world will look like by 2020?

For the rest of us? Answers on a tweet. And don’t be shy.