Home / Insights / The Bane of the Buzzword: Why Can't Microsoft Say What They Mean?

The Bane of the Buzzword: Why Can't Microsoft Say What They Mean?

I struggle with meaningless buzzwords, adjective fanfare and hollow vision statements that appear all too regularly in the world of technology communications. Mercifully I’m from a sporting goods background, so I tend to say what I mean and mean what I say. And always try to use language that our target audience understands.

So I wasn’t too surprised when I heard that Twitter’s CFO was the laughing stock of Twitter after he presented the slide below as Twitter’s new strategy statement – he caveated it by admitting, “I struggle to read it every time.”

It was the awkwardness, the repetition of ‘world’ (it’s in there three times) and the lack of joie de vivre for a relatively young, vibrant, innovative business that was so unimpressive in my mind.  Then again, it didn’t stop the share price rising by 7% that day, so the money men clearly love twaddle!

Still should have stuck with their mission statement:

Keeping to the theme of technology communications, I attended Microsoft’s recent ‘Future Decoded’ conference in London. The two day event was marketed as “not an attempt to predict the future, but instead will work to decipher it…we will seek to discover, provoke, and provide insight into all the uncertainty we may face in the years ahead…” 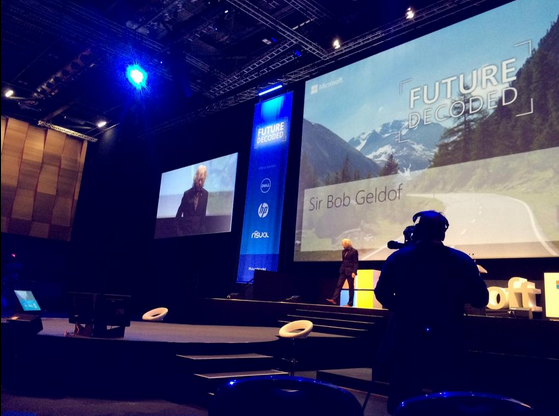 I forgave them this massive sense of ambiguity, as I’m fascinated by how technology is now becoming so focused on how we approach ‘the future’.  Plus I was excited to see some of the conference’s speaker line-up: Bob Geldof is an amazing orator, Sir Martin Sorrell is a great character, and even though he’s not my cup of tea, I was interested in what Jeremy Paxman would have to say about the future.

I was also anticipating Satya Nadella’s first UK speech as CEO of Microsoft, given how much the company has evolved during his nine months in charge.

The thing is, Nadella has become almost as famous for his drawn out, confusing, 3000+ word public memos as he has for his new job title. From these elocution safaris, he seems to be all about ‘helping people do more’…whatever that actually means in real terms.

So I was looking forward to some clarification on Microsoft’s future plans after all the massive steps forward they’ve taken since Nadella took charge, including opening Windows and Office up to other devices, Azure Machine Learning, Skype language translator and the positive signs for Windows 10. I could go on…

And yet Nadella’s 10 minute, highly predictable Q & A session left me feeling flat. Here’s a few of his remarks:

“Technology exists to augment human potential. Microsoft is building digital life and work experiences. It’s a platform approach that aims to harmonise the interests of the user and the developer.”

“The sense of empowerment is where Microsoft are helping local businesses be more productive. Productivity is the engine of human progress.”

There’s nothing you might need to disagree with here, but there’s nothing to be excited about either because there are no specifics. What does he really mean? How is he going to do this? Nobody in the room seemed clear about what he meant, and the comments on Twitter about his segment were also pretty negative.

And this is worrying. Microsoft have all the right moves, they’re just not making many of the right noises.

Which is the opposite problem Steve Ballmer had. He could certainly make a noise, and a very clear, passionate one at that. But he himself acknowledges that he was too slow on mobile, and Microsoft have had a lot of catching up to do as a result.

What did excite me at Future Decoded was Sir Martin Sorrell’s talk on the importance of creativity and innovation in this new digital, connected, society.

Sorrell has been running something called an ‘unconference’ since 2007. None of the traditional rules of a conference apply at an unconference, and the event is led by crowd sourcing. There’s a blank whiteboard at the start of the day and the discussion agenda is led by the attendees.

Sorrell wrote a brilliant, inspiring blog post about what goes on called ‘The Conference You Actually Want To Go To’. I especially liked this bit:

“The event asks a lot of people, in various different ways. Orthodoxies are challenged, intellects stretched and pretensions pricked. You’re forcibly encouraged to have as much fun as possible on very little sleep. It’s not for the faint hearted…’

Sorrell spoke about his favourite part of the unconference, called ‘The Pitch’.  A ‘Dragon’s Den for ideas that tackle real-world problems’, as he describes it. Save the Children set the brief: to come up with ways of using media and technology to support people affected by the Ebola Crisis.

After three days of refining their concepts, Save the Children were given several great ideas, one of which was given financial backing there and then.

That’s focus. That’s innovation. And that’s productivity. I loved that story, and the whole idea of an ‘unconference’. If we’re talking about the future and productivity, that’s the way to do it.

So Microsoft, I look forward to hearing more specific information about how and what you’re doing to make people more productive. For a brand that wants to be a leader in fields it’s historically been lagging in (cloud and mobile), it has to generate more excitement about how these technologies relate to productivity.

Microsoft are doing some remarkable things, it’s just the conveying of it all that’s proving to be the problem.

Last but not least, here are my favourite quotes from ‘Future Decoded’:

“The web is an encephalic membrane wrapped around the planet that we tap into at any time, but it can suck the individuality out of a person…and 3D printing sounds utter bollocks, but something will come out of it!”

“Marketing has lost power to finance and procurement. As a result the propensity of companies to take risks has lessened. The risk they take at director level in relation to reward they get is very much out of kilter. But this lack of willingness to take risk is absolutely fundamental.”