It’s the only shop of its kind in the world. 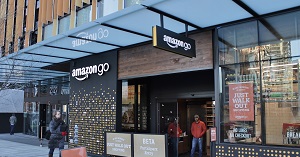 Amazon Go is the latest shopping craze – its differentiator? No checkouts. It features ‘just walk out’ technology that allows shoppers to enter the store, scan their app (so Amazon recognises who they are) pop the items they wish to buy in their bag and simply waltz out – or walk – totally up to the customer.

Minutes after shoppers leave the store having passed through a “transition area”, shoppers receive an itemised bill via email, charged to their Amazon account, the email also notes the exact length of time you were in the store down to the second… wow!

The Seattle-based store uses artificial intelligence (AI) technology to track shoppers’ movements around the store. Tested for a year Amazon has submitted tech patents and is clearly investing heavily in being more than just an online reseller.

Automation is also expanding in the business world with 74% of businesses either using automation or planning to, according to Tech Pro Research.

The ceiling is filled to the brim with literally hundreds of surveillance cameras that track shoppers’ every move. Each shelf is lined with sensor technology that can tell when you select an item.

The tech even has the spooky ability to tell if someone changed their mind on a purchase; for example if you pick up a bottle of Starbucks iced coffee, change your mind and pick up another flavour of Starbucks coffee, the sensors understand you’ve picked up a different product and charge you accordingly. 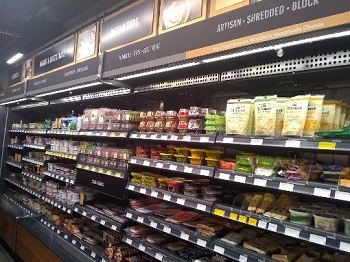 1. What if a shopper has insufficient funds in their account?

Amazon has a system in place to put a limit on what can be purchased.

2. What if people just walk in, take what they want and leave?

Everyone must scan their app and can’t enter unless they do so.

3. What if there’s a mistake with the amount someone bought?

4. What if teenagers go in and take alcohol?

Amazon has an employee in that section who checks IDs.

What’s not to love? Amazon has clearly played out a number of scenarios. Its reported that the technology has been tested hundreds of thousands of times without error.

Opinions on this ground-breaking shopping concept have been swift and exuberant with some viewing it as the way forward and the store of the future, others have found it too ‘big brother’. Naturally Amazon has described the experience as “effortless and magical.”

As you’d expect from a technology company, Team TSG is not exempt from holding an opinion on new technology especially if it involves walk out shopping!

I’m a prolific user of Amazon Prime – it just works! Therefore, why am I not wowed by Amazon Go? Fundamentally, I’ve concluded that Prime avoids me needing to go to a shop and means I can get items I’d like, but don’t necessarily need urgently, with the comfort that it’ll arrive on time, be fairly priced and what I wanted. Any problems & returns are easy.

The concept of Amazon Go is fine, but not adding a lot more than we’ve already got. Yes, it saves time scanning & processing a card, but that’s not too much of a hassle for most grocery-type shopping. Also, for large shops – where scanning can take time – are we going to go to the shop with loads of bags in hand or overfill the ones we’ve got to bursting point? I quite like the process of spreading my purchases into different bags at the checkout – balance between light & heavy, fresh from frozen etc. Also, let’s me review for anything I’ve forgotten.

I’m not over bothered about the security or returns aspects. I’m most likely to worry that they’ve not picked up something than I am about me getting a freebie (where my conscience would probably force me back to tell them & pay); a business the size of Amazon with the brains they employ will cover that off – even if requires a few prosecutions to get it sorted.

For some it will be a hit, but more likely to be a follower of online grocery orders for bulky items – where Tesco, Sainsbury & others take away the pain

I suspect Amazon will use the learning from Amazon Go to come back with something with a Wow factor – or drop it!

I like the idea but I think people might miss the interaction with the checkout staff. I enjoy a bit of chat when I’m in the mood…having said that when you’re just wanting to nip in and buy a few bits this would be nice and how great would the no queuing be when you’re in a rush. I suppose I’m somewhere in the middle with my opinion, but I’d totally try it out.

I think it’s interesting, but I saw on twitter a journalist noticed that a yoghurt didn’t get registered and she effectively accidentally shoplifted it! Amazon said that it was a very rare occurrence, but it does bring up that Amazon has ways to go with its tracking technologies! (issues with items being put back in the wrong place or losing facial tracking) I love the idea of it because I hate queuing and talking to people though! 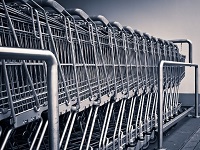 I think this is a great idea however I am slightly sceptical in the idea of technology taking over everything, especially human interaction. That said, it would be very interesting to try this out and to see if this takes off!

As someone who goes out of their way to avoid human interaction when shopping and the like – using self-service checkouts, ordering prescriptions online – I think it’s brilliant. It begs the question of to what degree people are employed and are jobs at risk? You could link it to digital skills – things like this won’t necessarily reduce available jobs but there’ll be different jobs. In this world, you won’t be a shop assistant, you’ll be manning the technology and at present, there’s a HUGE digital skills gap.

I love anything new and it sounds like a very different shopping experience so definitely a shop I would visit.

I have mixed feelings about this – for ease it will be great to walk in/out grab lunch in minutes and not have to interact with anyone. Where you may miss out is where human interaction is required to ask a question about a product or seek advice – would this also be digital if so, I think I would miss the human interaction at this point Also the risk of people losing jobs, would shop assistants more likely be employed in the tech industry or as ‘cyber store detectives’. If you think of 8 years ago when Tesco announced that in the next few years shoppers would self pick, scan and pack from the shelves as they go around the store and then pay without human interaction – people said it would see the end of Tesco if this happened. Its a normal way of shopping for some now, however there is the human interaction there if needed… well there is at the moment…. maybe they are watching Amazon-Go. So very in the middle, but like most things it may be something of a way of life in the future where we talk about “…the good old days at the till, when there was a person sitting there, can you remember those times”

I would shop there as I’m a fan of the self-service checkouts that currently exist and this is simply the next generation. With the move towards AI and automation I think we’ll inevitably see an exponential amount of jobs lost to robots in the next 10 years or so

It’s inevitable that machines will continue to infringe into areas of work that previously only humans could do. The societal and political implications are potentially quite scary. It’s not clear what will happen if (when?) millions of shop workers, taxi drivers and call center workers are gradually replaced by AI, chat bots and robotics.

It’s also becoming increasingly difficult to know what advice to give to our children in terms of guaranteeing them a long and rewarding career. If you had told me 10 years ago that a fully autonomous car could drive around down town San Francisco in rush hour traffic I would have told you you were out of your mind.

I like the idea of a ‘walk in’ vending machine but would be concerned about the risk of errors and, more importantly, how you put them right. Allowing the technology to take money from your account without positive confirmation would be my biggest concern. Also, knowing how often the self-service checkouts go wrong who knows where this would lead

Although this would appear to provide a quick and “hassle free” shopping experience, I have mixed feelings. This is largely due to the process of payment without any interaction as it raises questions on the potential for errors and the level of security in place to protect against misuse of your payment and person details. Additionally, there is a slight feel of Big Brother is watching.

maybe I’m in the minority, but, I don’t think it is a massive tech jump forward. We’ve already got the tech in place to walk around ASDA, select your stuff, scan it, pop it in your bag, and leave without interaction… aka “scan and go” with a handheld terminal. To me, in simple terms, they’ve removed the need to scan a barcode, and made it possible for them to take your money automatically ha ha! Perhaps they don’t have “scan and go” this in the States, hence the amount of craic in the news…?

Saying that, the individual bits of tech is quite cool, detecting when an item is taken from a shelf, ensuring that if you put it back, the system knows, is all good stuff. I suspect they’ll use this in the further automation of their distribution warehouses. But by using it in a supermarket, it looks quite exciting… and gets the media chatting!

Would I use it? hmmmmm I would say not in a million years at this point but you know what it’s like, a few friends start raving about it and you think I’ll give it a try.

It sounds very big brother to me and I’m not totally convinced how and if it will work but it’s probably the way forward!

Katy Bernstein, Marketing (and Author of this blog!)

I’d give it a whirl. What I love about Amazon is their ability to listen to their customers and give them exactly what they want. Meaning I spend way more on books and Harry Potter paraphernalia than I’d like due to the emails showing me all the stuff they think I want- which I always do. In turn they’re an extremely commercial business. They know their market and they listen. It’s not the first ground-breaking idea Amazon have ever had, and it certainly won’t be the last.

Amazon: “Our vision is to be earth’s most customer-centric company; to build a place where people can come to find and discover anything they might want to buy online”