You know those shows ‘Great Movie Mistakes?’ I love them. For me there’s something truly wonderful about a movie with a multi million dollar budget (which even has designated ‘continuity’ people to make sure mistakes don’t happen) still making inexplicable gaffs.

‘Plot holes’ is what they’re known as in the industry.

My favourite movie plot holes, in no particular order, are as follows: 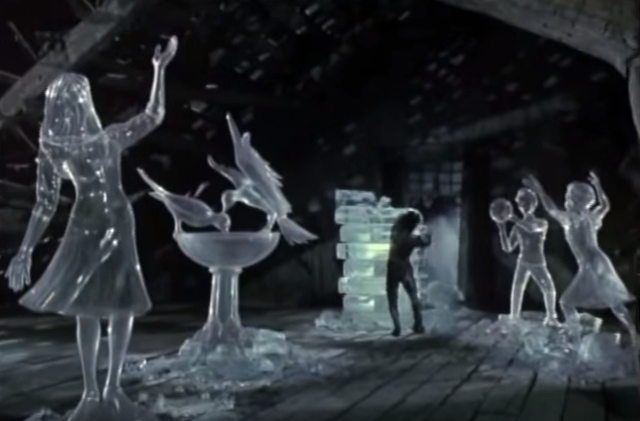 Where, just where, did Edward get all that ice in the final mansion scene?

The movie was set in Florida so it wasn’t exactly a cold climate. He was on the run from the police so could hardly wander into town and buy some, even if he could pick the ice up with scissors for hands.

The timeline is wrong.  The opening scene of The Mummy takes place in 1923. It then takes Rick 3 years from wandering through the desert to find civilisation again, so it’s 1926 when the bulk of the movie takes place, and where he meets his future missus Evie.

The Mummy Returns is set in 1933, but Evie and Rick’s son is said to be 8 years old. What kind of science means he can be born the year before his parents meet?

The alleged reason why Kevin’s parents can’t get in touch with him whilst they’re in Paris and he’s, well, home alone, is because a storm caused a tree to fall and take out the phone lines. And yet somehow that doesn’t stop Kevin using the phone to order ‘a large cheese pizza just for me’.

As you can probably tell, I have far too much time on my hands…

Anyway, one of these plot holes has just been given a perfectly rational explanation.

Handily timed on Home Alone’s 25th anniversary (watch out for it coming back to cinemas this Christmas) a discussion on Reddit about the whole plot hole scenario led to this response from one practical minded Redditor:

“I always assumed the tree actually severed the main trunk line to the whole town, but local calls within the same exchange still worked.”

So, is this a possibility?

I asked our National Technical Director and fellow blogger Paul Burns for his take on it. He said,

“In 1990 this was the way most telephone lines were set up, but today we’re moving further and further away from having analogue phone lines (it’s really just BT who are holding onto ‘lines and minutes’ for their dear life).

“Now most consumers have mobile phones (whether Kevin would have had one at the age of 8 I don’t know – that’s a parenting call) and of course the internet – Business Class Connectivity is becoming a top choice for those who want to cut down on their lines and minutes (via SIP) and achieve faster broadband speeds.

This type of connectivity levels means that you don’t even need a phone and can use private hosted solutions or public services like Skype for Business to make voice and video calls. Business class connectivity now carries a lot of voice traffic rather than the traditional ISDN lines.”

So there you have it – a perfectly rational explanation for a plot hole that has been talked about for 25 years.

Slightly more rational than the explanation for Edward Scissorhands my friend sent me last week which involves a helicopter, a massive block of ice and a broken roof (number 7 of ’16 Maddening Movie Plot Holes Fixed with One Simple Change’).

Can you think of any more plot holes that have a simple, technological solution? Or wouldn’t happen with technology today?

Telephony Webinar Part 2: Being prepared for upcoming changes that will affect your business