The managed IT services organisation’s official partnership with Mental Health UK began in January 2020, with the company committing to raising funds for the charity for 3 years.

TSG has already raised over £3,000 for its new charity partner via its yearly laptop buyback scheme and by kicking off its first staff-wide fundraising challenge.

Following an internal selection process in which TSG colleagues were able to submit charities close to their hearts and then vote on a final selection of three, Mental Health UK came out on top.

With one in four people experiencing mental health problems at some point in their lives and the especially startling statistic that one in five adults has considered taking their own life at some point, it’s clear that mental health is a pressing issue in the UK.

What’s more, the World Health Organisation estimates that up to 50% of people with severe mental health problems in developed countries receive no treatment, and over 122,000 people in the UK are waiting eight weeks between an initial and follow-up appointment regarding their mental health.

Mental Health UK provides help to people experiencing mental health issues through support groups, its Mental Health and Money Advice service and On The Inside digital information guides, which have reached an estimated 4.5 million people.

100 TSG colleagues will take part in a walkathon which will see them walk the equivalent distance from the organisation’s Team Valley office to Microsoft’s Seattle HQ – a huge 9.6 million steps! 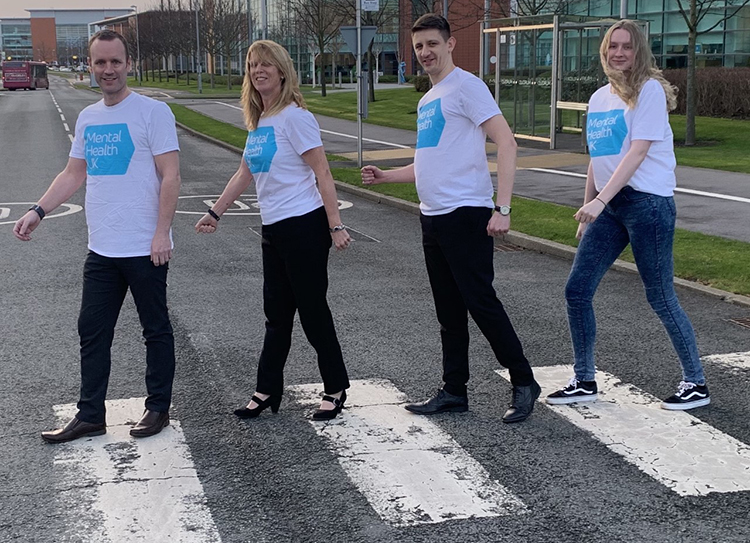 The company’s culture places huge importance on charity fundraising; TSG colleagues across the UK regularly taking part in ‘fun days’ and a variety of additional activities, including laptop buyback schemes, Christmas Jumper Day and the Great North Run, to raise money for charities close to its heart. The company raised over £40,000 for its last corporate partner, the British Heart Foundation, and has also recently supported Maggie’s Centre in Newcastle and the 2019 World Transplant Games.

TSG CEO, David Stonehouse, commented, “Mental health is something which touches most of our lives, whether we’ve experienced mental health problems ourselves or have family members, friends or colleagues who have.

“It’s fantastic that the stigma around mental health is reducing, and that’s due in large part to charities like Mental Health UK and its four supporting charities because they’re providing vital information and support, as well as encouraging people to start conversations around mental health and self-help.

“Additionally, if this helps us to be more aware and open up conversations about mental health within TSG, it makes this partnership even more worthwhile.”

Mental Health UK brings together four national mental health charities – Rethink Mental Illness, Support in Mind Scotland, Hafal and MindWise – to create a strong team of mental health experts in every nation of the UK and allow more people across the UK to access support for their mental health, as well as friends, family members and carers.

James Fletcher, Mental Health UK’s Head of Corporate Partnerships, commented, “Thank you so much to TSG for choosing Mental Health UK as its new partner. And what a way to start!

“Good luck to all the teams who are taking on their walkathon challenge from the Team Valley to Microsoft Way in Seattle. TSG has teams of ten attempting to walk 9.6 million steps – that’s a million steps each!

“We’re so grateful to TSG – every step will make a difference to the advice, information, and support we can offer to people affected by mental health problems.”