I work in the Apps team here within TSG as a Senior Specialist for Microsoft’s Dynamics NAV ERP solution. Some of my colleagues who perform the same role call themselves ‘NAV guys’, but I think of myself as a ‘Microsoft guy’.

I have been working with the Microsoft Stack since the Windows 3 days and before that I was into programming the home computers of the day in assembler language. So I’m really old school, or experienced if you want to be polite about me.

The latest version of Dynamics NAV

Microsoft is showing no signs of slowing down with its recent innovations. The message from its recent Tech Summit was that the cloud is going to become more important than ever, and businesses should look to leverage it sooner rather than later.

The latest version of Microsoft Dynamics NAV was released in December 2017 with a host of new features that have seriously impressed the developer community. The new release stays true to Microsoft’s aim of deeply integrating all of its products, allowing for a better user experience and as a result, significantly improved productivity for its users.

The great thing about Microsoft Dynamics NAV 2018 is that, if you’re on the Microsoft enhancement plan, there’s no additional cost for upgrading to the latest version. With NAV 2018 you’re guaranteed 5 years of mainstream support and 5 years of extended support.

Here’s some of the key new features within Microsoft Dynamics NAV – you can see a demo of some of these in the recording of our ‘what’s new in NAV 2018?’ webinar below. In total, there are over 600 changes between 2017 and 2018, so we’ll look at some of the most valuable. 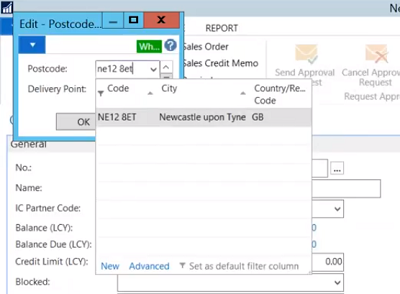 You’ll be used to this functionality on almost any website that requires you to sign up to an account. When you provide your address, you can enter your postcode and the website will go and look up all addresses at that postcode. The inability to do this in NAV has long been a bugbear of users, so Microsoft has allowed the use of a third-party webservice to do this using one of its new APIs. When you’re adding new companies on a daily basis, you don’t need us to tell you how much time this can save you. What’s also great about this feature is that the address is formatted in the Post Office’s preferred way; no more lost mail!

We know that Microsoft is working hard on its artificial intelligence (AI) offering; my colleague Katy has written a blog about the AI sentiment analysis tool we’re trialling that’s available as part of Dynamics 365, while our Internal Systems Developer Sam saw some mind-blowing AI demos at the Microsoft Tech Summit recently – keep your eyes peeled for his upcoming blog. In NAV this new AI feature primarily works by reading images. By adding an image to your contact cards, NAV can detect the person’s gender and estimate attributes like age. However, it doesn’t overwrite any existing attributes. 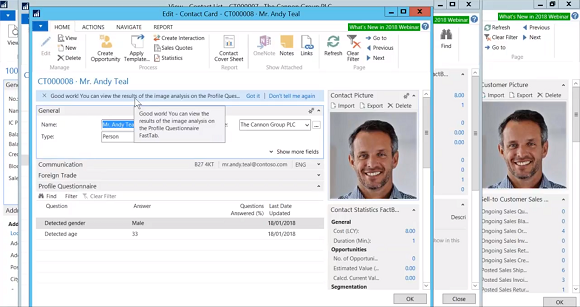 You can also use this when adding new items of stock. We tested this by adding a photo of a chair; the AI was able to categorise it as a chair and as furniture, attribute a colour and even take a stab at the height and depth of it – and it was surprisingly accurate. This will save huge amounts of time in data entry, as the artificial intelligence does the work for you.

Customisation of the user interface

Not only can you customise your homepage to include all of the information that’s most relevant to you, you can now customise account or contact fields. You can remove redundant fields like fax and telex – does anyone even use them anymore? – to streamline the user experience. You can also add fields that you know you’ll use regularly.

Not only is this a great update that allows users to only see the fields they require, it marks a huge shift in control. Previously, making changes like this would have required significant development work from your in-house development team or, more likely, your outsourced provider like TSG. By allowing you to customise your interface, Microsoft is continuing its trend of putting more power in your hands.

Dynamics NAV 2018 brings with it 44 APIs, with another 16 in the pipeline. This came about largely due to the availability of competitor APIs, like Sage and Quickbooks. NAV is now exposing some of its features to external programmes, allowing you to do more than ever. For example, being able to create a 100 line Sales Order in one API call instead of repeated calls for each Sales Line.

That’s just a small handful of the more useful new features within NAV 2018. I delivered a webinar with my colleagues Paul Dennis and Bill Tomlinson where I demoed these features and some more. You can view the webinar below: