During the CES (Consumer Electronics Show) in January this year, Intel introduced their tiny PC ‘on-a-stick’ which they have named the Compute Stick.

To look at, it does resemble an oversized memory stick, but instead of USB it has a HDMI connection. 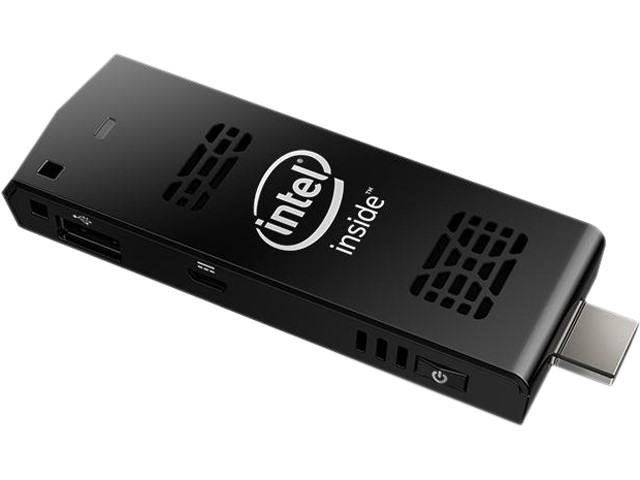 It contains mid to high-end tablet hardware (minus a display) and when plugged into a HDMI input on a TV or monitor, it gives you a full PC experience, just in a tiny package.

The Compute Stick comes with Windows 8.1 with Bing, an Intel Atom quad-core processor, 2GB of RAM, 32GB of storage (expandable via MicroSD) and 802.11b/g/n Wi-Fi.

That is a similar level of hardware to the Microsoft Surface 2 (not the Pro) and it is powered through a Micro USB jack on the side of the stick.

There’s also a full-sized USB 2 port, and Bluetooth 4 for connecting a mouse and keyboard if you are using the USB port for something else. Of course, a USB Hub will provide additional ports if you should need them.

Plugging this in to a fairly modern low-cost monitor that has an HDMI input would give you a very small footprint PC that is very affordable, with low power usage leading to low running costs.

I can see this class of device being used in single-use scenarios like an Accounts Clerk processing transactions, a Warehouse worker booking stock in and out, or even a secondary device for Mangers/Directors who only really want to look at reports and their KPI dashboards on it.

Being part of the Apps team here at TSG and Microsoft Dynamics NAV in particular, I was keen to see how well NAV 2015 performed on the Compute Stick. I’m happy to report that the 4 Cores of the Intel Atom processor keep the NAV client performing quickly enough for general day-to-day work.

There isn’t currently a version of the Compute Stick being offered with Windows 8.1 Professional, so if you’re running a Windows based Domain then you would likely need to perform an in-place upgrade to the Windows 8.1 Pro Pack (an extra cost)

However, at a likely street price of around £100, this could be coming up on the radar of a lot of tech buyers as soon as it is released in the UK in the next few weeks, and with promised Windows 10 compatibility when that reaches general availability later this year, this is one very interesting new form factor.

What do you think? Would you use something like the Compute Stick? Can it change the technology landscape?